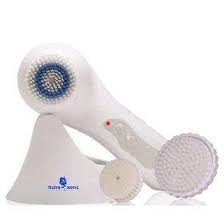 I thought it might be a good idea to write a little about my new facial brush – the Nutra Sonic – firstly because it’s something I’m really pleased with and therefore would like to share, but also because when I was researching the brush, I struggled to find many reviews that weren’t promotional (meaning that the reviewers had been sent a free brush to review, resulting in a blog sounding very ‘saley’) so here are my thoughts on the Nutra Sonic:

Nutra Sonic is a sonic facial brush that has reached the market to rival the infamous Clarisonic. The basic brush is cheaper, yet you can also get considerably more for your money. I bought the model that comes with 4 modes (sensitive, standard, exfoliation and body) and the significant difference between this brush and the Clarisonic is the exfoliation mode, which allows you to use a scrub whilst the brush ‘judders’ which creates a really intense exfoliation. The model I bought also came with 3 brushes; one for sensitive skin, one normal brush and one slightly larger brush for the body. I imported this brush into the UK from the states and it ended up costing about £100 including p+p which still worked out considerably cheaper than even a second-hand Clarisonic (bleurgh – the idea of a second hand facial brush to me is about as appealing as a second-hand toothbrush; I’m aware you can change the head, but still!) which is appealing, however I needed to make sure that it would be a sensible decision, as there’s no point in buying something cheaper if it’s going to prove inferior. The research I did informed me that the main problem with the Nutra Sonic is the fact that the model can be temperamental and a few people have experienced the model giving up after a few months of use and not working again. Therefore, I bought mine with a warranty to be on the safe side. The only other problem reported is that some people believe the brush heads are less soft than on the Clarisonic. I can’t comment on this as I’ve never used a Clarisonic.

In my experience, this brush is fantastic. I have noticed a considerable change in my skin (spot-prone in parts, dry in others, open pores, basically a high-charging dermatologist’s dream) and this has really calmed down ALL my skin issues. I’m still getting spots, although they’re not cystic and clear up very quickly and are much less angry than I’m used to. They also don’t hang around for long and are easy to conceal. My dry patches are non-existent and the my pores are much clearer.

It’s worth noting at this point that I have pretty hardcore skin; it’s been through everything, from strong chemical peels, to laser, to microdermabrasion and nothing aggravates it. However, when I first used the exfoliation mode, the blackheads on my nose all popped out (and they had been there for YEARS) and my skin reacted rather angrily to the whole experience! It all calmed down in a couple of days after lots of moisturiser, but the point I’m making is that if my hardcore skin is going to react to this, you’ll want to tread carefully if you’re on the sensitive side. The fact that the blackheads shifted is astonishing, not even microdermabrasion shifted those evil little things.

So to conclude, I’m really happy with the brush. As I said, I can’t compare it to the Clarisonic, but the people who can view this brush favourably and I’m really happy I decided to go ahead and purchase it. Soon, I’ll write a blog on the various cleansers I’ve used with the brush, the techniques that work for me and any tips I think are worth mentioning. Any questions, feel free to post and thanks for reading.

Cleansers to use with Nutra Sonic/Clarisonic Facial Brush