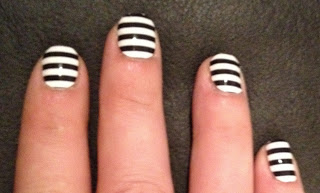 Since using the NCLA wraps (review of which can be found here) I’ve developed a bit of an infatuation with nail wraps in general and as a consequence, I’m on a mission to find the best.  I don’t like the idea of faffing about with heating them, so I’m only open to trying the ones where you can stick and go.

I got a few good days of use out of my NCLA ones and they were nice and easy to remove; I just peeled them off and went over the nail with a cotton pad soaked in varnish remover.  The wraps could’ve comfortably lasted a few days longer, I was just keen to try another pattern.

I had a pack of Nail Rock Designer Nail Wraps hanging around with a Black and White Stripes pattern.  I liked the pattern, I felt it was quite 60’s although my boyfriend pointed out that they’d prove equally complimentary to the hands of a Queens Park or Newcastle United football fan….so that’s handy. 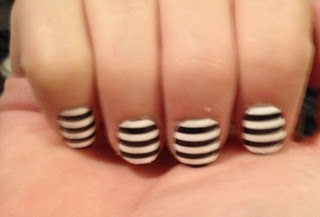 The application for these wraps was again easy, although the wrap felt a little bit thicker which was made it harder to file the edge off.  The finished nails looked good, but the big difference between these ones and the NCLA ones is that the edges of these were very scratchy; I couldn’t even apply eye cream properly as the ends of my fingers were so raggedy.  They don’t look raggedy (unless you look really close) but I wasn’t too thrilled with the way they felt.

I applied these last night and they really haven’t held well.  Firstly, the edges keep catching on things and no amount of smoothing them down has made any difference, plus one of the wraps came almost completely off earlier which isn’t ideal.  I feel like I need to be more careful with these wraps whereas the NCLA ones I felt wouldn’t budge until I wanted them to. 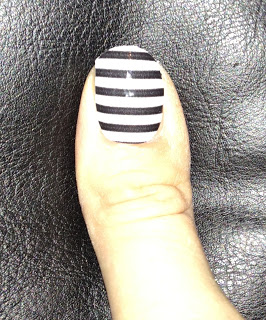 Lastly, little bubbles have started to appear under the nails.  I don’t know if this is a flaw in my application technique or a problem with the wraps themselves, but I don’t think I’ll try these wraps again as I don’t feel they’re as easy to work with as the NCLA wraps.

The NCLA ones involve slightly more effort as you need to apply a clear varnish before and after you apply the wrap, but if this is the difference between wraps that stay put and wraps that start peeling then I think it’s worth the effort.

Today I bought a couple more wraps:  Nailease and Myleene Klass.  Both of these don’t appear to involve faffing about with heat, so I’m hoping they’ll be as good as the NCLA ones, otherwise I’m likely to stick with NCLA wraps instead.

Anybody have any other nail wrap brands to recommend?

For my review of this product, please click here. I thought the shade of this BB Cream was quite pale, but...