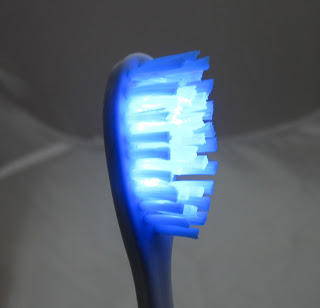 I have been putting off reviewing this toothbrush for quite some time as it has me completely conflicted; there are a few elements that I think are absolutely fantastic but there’s also something quite significant that I believe goes against it.  I’ll explain more below, but in the meantime, let me introduce you to the Blue Illume toothbrush (S).

The Blue Illume toothbrush is a standard toothbrush with 2 built-in blue lights that do two things; firstly, they whiten teeth and secondly they reduce bacteria which is brilliant for overall dental health.  You use this toothbrush in the same way you would a normal toothbrush; you just apply toothpaste, turn the lights on, brush for 2 minutes and you’re done. 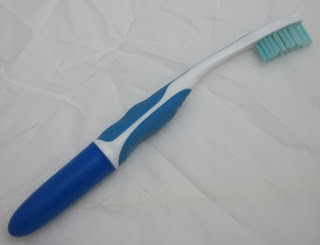 The thing that excites me most about this brush is the fact that I’ve seen, first hand, the effect of blue light whitening and it’s really impressive.  When I was first approached to try this toothbrush I was incredibly eager to as it made perfect sense in a kind of, ‘why hasn’t anyone thought of this before?’ type moment.  As soon as it arrived, I got it out and started brushing and here’s where the major negative for me came in.

The brush head is really large and much larger than I’ve used before.  I wouldn’t say I have a particularly small mouth, but I found it almost impossible to get to the back of my mouth and reach every nook and cranny to result in a deep clean.  Getting to all the non-visible parts of my mouth, to me, are absolutely essential as often people can have great visible teeth because they focus so much attention on those parts, but have rubbish back teeth because they can’t see them and therefore don’t witness the decay taking place.  You could give me the most amazing toothbrush in the world, but if I can’t use it to clean all my teeth, I’m not going to be able to commit to using it all the time. 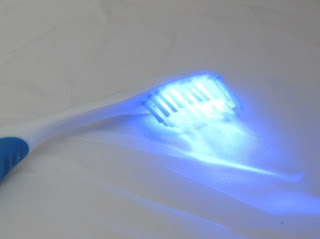 Therefore, to trial this brush I’ve been first cleaning my mouth fully with my regular toothbrush, then using the Blue Illume to again give them a clean.  This isn’t the greatest approach as firstly, I’m very wary of the impact overbrushing can have both on the teeth and the gumline and secondly, it’s an awful lot of faffing about.

Having said that, I do still have faith in the ability of this toothbrush and having used it for 2 weeks, morning and night, I do think it is having a promising whitening effect on my teeth as they look whiter, brighter and generally cleaner.  Obviously this could be due to the fact that I’m now brushing my teeth for almost five minutes twice a day, but I do think the blue light works as I have a little bit of sensitivity that only kicks off when I use whitening treatments (very mildly, thankfully) and it does react when I move this brush over the area.

In conclusion, I do think this is a really promising product that just needs a bit of fine tuning.  If they were to release another version of this with a much smaller head I definitely think I’d become a big fan, but at the moment, it’s just too big a brush head for me.

However, if you fancy helping me work out if my mouth really is too small after all and giving one of these brushes a test run yourself, the company behind Blue Illume have very kindly given me two brushes to giveaway to my readers.  So to be in with a chance of winning one of the two brushes available, all you need to do is ensure you’re a Google Friend Connect follower by following on the right hand side of the blog (where it says “followers”) and leave a comment on this post letting me know you’d like to be entered.

For an extra entry, you can also follow me on Facebook here and for yet another entry, follow me on Twitter here, but make sure you let me know in the comment below what you’ve done to enter so I know how many entries to add for you.

More information about the Blue Illume toothbrush can be found here.

Sensationail StripGel Peel Off Base Coat

Obviously I'm not in any way suggesting that I find deodorants exciting, they're more functional, every day bits of kit...