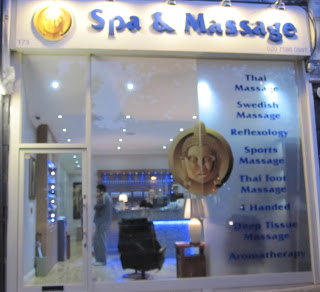 Last week I had the opportunity to try out a 30 minute massage at one of the Spa and Massage venues in London. I went along with the intention of having an indulgent, pampering and relaxing experience to sooth away my stresses.  My experience was none of the above, but I’m booked in again for another one this week and I’ll explain why below.

Spa and Massage have a slightly different approach to the typical treatment salon as firstly, they keep longer opening hours so that people can have their massage later in the evening (they open until 11pm every night) but they also allow for walk-in appointments.  They focus on only massage and you can choose between Thai, Swedish, Deep-Tissue, Sports, Reflexology and their signature 4-Handed Massage.  Then you decide how long you want the massage to last: 30, 60, 90 or 120 minutes and prices start at £30 for 30 minutes.  I really like the idea of this who approach as it’s making massage much more accessible, plus the later opening hours and drop-in facilities mean you don’t need to plan around an appointment. 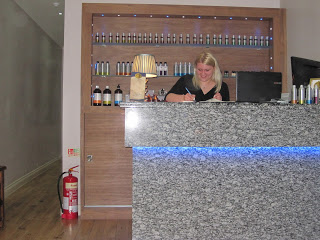 I was a little nervous about my first visit as the long opening hours and drop-in approach made me wonder if it was one of those types of massage salons that you tend to find lining the Kentish Town Road, frequented by middle-aged men.  You know what I mean.  Anyway, as soon as I arrived all fears were calmed as the salon is a relaxing, well maintained, spotless and sophisticated set-up that is welcoming without being intimidating.  The lovely receptionist confirmed my appointment, asked what massage I would like (I said I’d like something relaxing so she suggested Swedish), called my massage therapist (Nina) and offered me some tea – I’m not sure what the tea was but it was some sort of spicy, fruity concoction that was served warm rather than hot.  Once I’d finished my tea, I was led to the massage room, asked to get undressed and get under the towel (whilst Nina waited outside) and then my massage began.

Nina asked me if I had any areas of concern.  I use crutches and have been on them for well over ten years, and the consequence is that my shoulders and back are pretty much solid muscle.  I’ve had many massages before, of all variants, and every therapist has had absolutely no idea what to do with me as there is literally no give in the muscles on my back and shoulders as they’re continually being built-up every time I take a step, so it’s a bit of a no-win situation!  It doesn’t cause me too many issues at the moment, but inevitably over time it will as it isn’t natural for my muscles to be in such a permanent state of firmness.  I do have occasional problems, mainly when trying to tie my shoelaces and put on jackets, as my back either twinges or my shoulders don’t allow for me to bend around so I can reach my back.  So I said to Nina that there weren’t any major concerns and really I just wanted to get a feel for the massage.

Nina started with gentle strokes and worked at my the various lumps and kinks along my back.  We then got into conversation about my disability and Nina asked if I would mind if she stretched me a bit, warning me that it would probably be uncomfortable.  Normally I wouldn’t agree to such things as I’m always a bit wary of having someone work on parts of me that are a direct result of having a disability (let’s face it, if they mucked it up I’d be completely out of action!) but there was something about Nina’s confidence in the massage that made me agree.  Since the moment she started I felt as if she knew exactly what she was doing, whereas usually I’m used to therapists moaning about the solidity of my back and being unsure of what to do with me.  So I went along with it and yes, it was quite uncomfortable but not unbearable.  However, what was really interesting was that as she went on (she started very gently) I started to feel my back and shoulders give in and relax.  I haven’t felt either of these parts of me relax for at least five years (it sounds terrible but it really is one of those things you learn to live with) and as Nina carried on, she started bending my arms behind my back to the extent where I could reach the back of my neck; so if you imagine putting your arm behind your lower back and then moving it upwards to your neck and how difficult that is for someone without my issues (I’ve been asking people to do it to see if my assessments were correct!) and then within 15 minutes of working on me, Nina made it possible for me to do it, and it didn’t hurt! 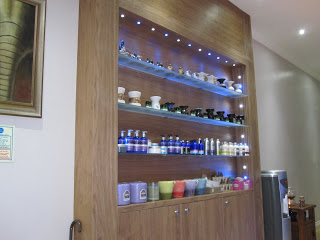 Nina and I discussed my back and shoulder issues in more detail and as we discussed it further I realised that this was the first massage I’d had where the person administered it saw my issues as a challenge rather than a no-go area, which is why I booked in with Nina the following week and I plan to do my best to give myself a weekly massage from now on.

The difference after one 30 minute visit was astounding.  Firstly, I didn’t realise just how hunched over I was until after the treatment as I was walking much straighter, my neck felt longer and my shoulders were sitting lower.  I was expecting all kinds of pain post-treatment (I had a sports massage once where I felt like I’d been beaten up for about a week afterwards) but other than a tiny bit of tenderness in my lower back, there was nothing to report other than positive results.

So, it’s safe to say that there isn’t a bad thing to say about this treatment or the venue.  I had my massage at Spa and Massage in Belsize Park (T) with Nina.

I did a rubbish job at the application of this polish but I was in a hurry due to the...