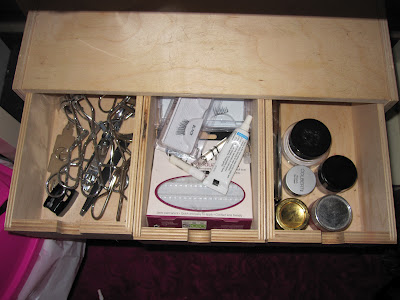 Let’s Get Organised: The Sequel 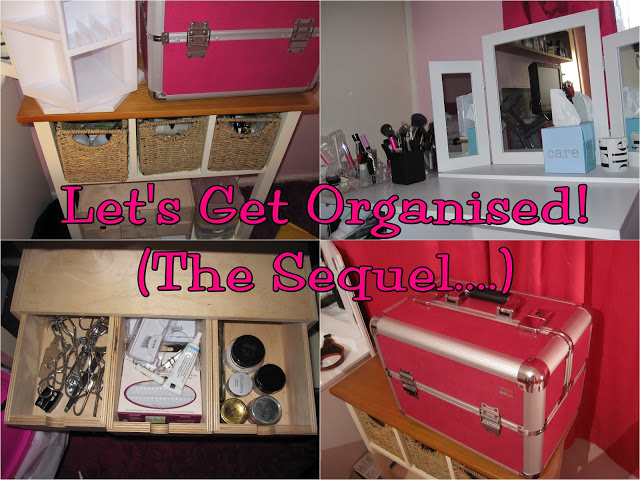 A while ago I wrote a post about organising my vast collection of beauty items and whilst it was definitely more organised than it was when I started, it was still nowhere near organised enough for me to know the whereabouts of everything I own (which is a big ask, in fairness) so I decided to tackle the issue again.

I’ve always had this fantasy of a white dressing table with a three-sided mirror, facing a window.  On this table would be a candle, a small bunch of flowers, a box of tissues and very little else.  Whilst I’m not quite there yet, I’m definitely the closest I’ve ever been and this was due to a few things; firstly, I worked out what I really use regularly and sectioned it accordingly and secondly, I’ve invested in a few key items to aid my quest to organised beauty.

I’ll start with my dressing table which was absolute chaos:

I started by removing everything on top of the table other than the brush stands and a small John Lewis unit that I’ve used for keeping things like cotton buds/pads, sponges and lipbalms.  I’ve also removed everything the three drawers in the dressing table and arranged them so the bottom drawer contains my most regularly used body and hair products, the middle contains my most used skincare and the top my most used make-up.  I also put all my most used brushes into an ELF container.

Behind the mirror are three more brush containers (either old cotton bud containers or glasses) that contain my regularly used brushes (but not most used…I have a real thing for brushes) separated into three different categories; eyes, face and powder.  Lastly in that section is a small stand that contains all my hair clips for styling.

Next up is my Roo Burmese Beauty Case: 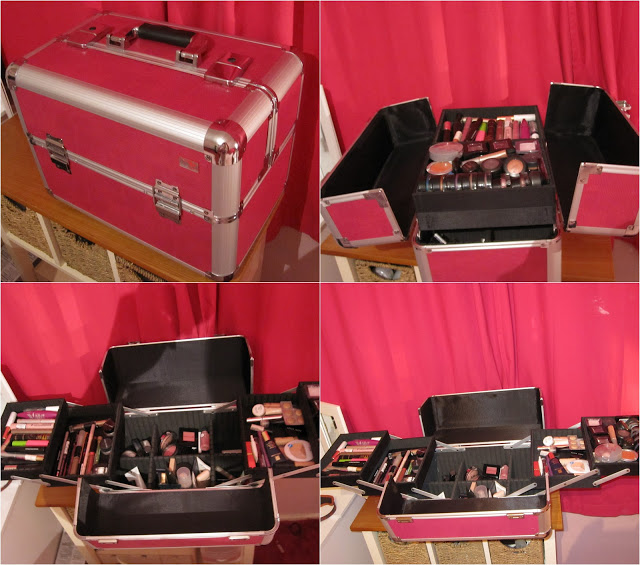 I was offered the chance to review one of these and I jumped at the chance as not only is the range phenomenal (pretty much every size and design you can think of for beauty storage) but they’re also reasonably priced; I’ve avoided buying purpose-built beauty storage as all the products I’ve come across cost painfully huge amounts of money (I’ve yet to find something large enough that wouldn’t set me back hundreds) but the one I have – which is absolutely massive – costs £49.99.  It’s also fully customisable, meaning that you can change around the section sizes to fit in everything, which I did as you can probably see in the pictures. The case contains 14 sections, but I changed it to 10:

I picked up a little unit from a second hand store which I thought would be perfect for organising my bits and bobs.  It’s a unit with three, fairly deep, pull-out basket drawers and a large shelf underneath.  In the first drawer I keep make-up removers, the second drawer is all for treatments and the third contains moisturisers. 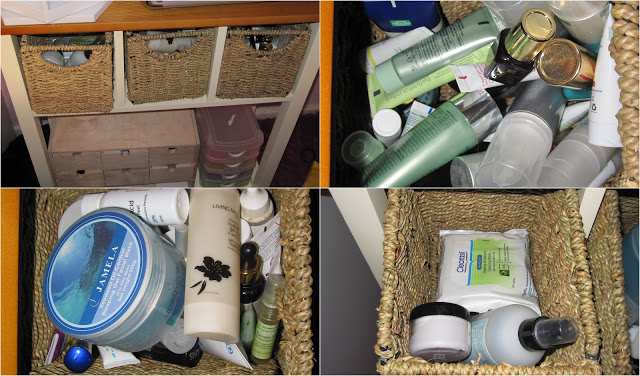 On top of the unit sits my Roo case and, rather ironically, my now defunct Lori Greiner tabletop organiser; I haven’t given up on finding a use for this just yet, but at the moment it stands empty.  Underneat the unit sits a  very small cabinet that I mentioned in my first post which contains mainly samples of bits and bobs, and my Ikea Unit.

I mentioned the Ikea cabinet in my previous post, and I’m still using it, just for different things!  There are supposed to be nine drawers in total, but I only use six of them and I use the bottom space as open storage.  The bottom three drawers are used for – if you can believe it – more make-up brushes, all of which are broken down into categories (same as the ones on my dressing table).  The first of the upper three drawers is used for tools (such as tweezers and lash curlers), the second contains everything relating to false lashes and the third contains eye creams.

I’ve found the key to keeping organising (it’s only been a week but normally chaos takes over within days, so I’m optimistic I’ve cracked it this time!) is keeping everything you use regularly and being vigilant with storing stuff that you can’t part with, but don’t use every day.  I also make sure that I put everything I use back into it’s rightful place so that it all stays organised.  Now all I need is a bunch of flowers (I’m thinking fake, for an easy life) and I’ll have my dream dressing table!

Disclaimer: obviously the images in this post contain pretty much everything I own cosmetic-wise, so it’d be a long and rather dull process to list what I paid for and what I didn’t, but in relation to storage, everything was paid for by me other than the Roo case which was sent for review.

My box took a bit of a battering in transit unfortunately.   There's a new playa' in the world of...