PIN IT
Rambles and Witterings

Slight deviation from my usual posts today as I thought I’d share with you all the books I read whilst I was away.  The one major thing I absolutely love to do on holiday is absorb myself in a good book.  I treat holidays as periods of complete and utter indulgence and relaxation where I can do all the things I like to do that I can’t always make time for at home.  These include sleeping lots, reading lots and eating lots and I don’t even drink whilst I’m away as I really want to give my body a total rest.

Twitter followers may know that I purchased a Kindle a little while ago and it is total love; usually my baggage ends up being on the hefty side due to the books I take with me (I can’t handle the idea of being left with nothing to read!) so having a choice of close to 30 books with me whilst knowing that my baggage came in under 8kgs (and most of that was make-up, in fairness) left me feeling uber-smug.

I have absolutely no academic standards when it comes to reading; I read whatever interests me.  I loved the Fifty Shades trilogy and I thought Stieg Larsson created a modern, feminist icon for us all to thoroughly enjoy.  I love books that get me turning the page and staying up well past the point where I should be sleeping, so these are the books that kept me company whilst I was on holiday: 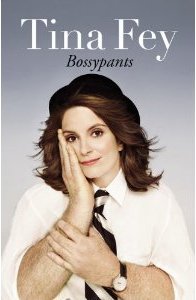 I dig this chick.  I’m a big 30 Rock fan and I loved Mean Girls too, so I was very excited to read her story and it made for a joyful and entertaining read.  Her fabulous sarcasm and witty story-telling was interjected with cute and sometimes hilarious images of her growing years.

She shared her opinion on a wide variety of topics including beauty (e.g. starting a chapter with: “”How do you stay so eternally youthful?” “Your skin is so flawless.  What’s your Secret” People often ask Sharon Stone”) and how being an improvisational comedienne was a struggle due to her gender.  It was insightful, daring, easy to read and left you desperately wishing you could call her up and tell her the bits you thought were funny.  Total love for Tina Fey.

I’ve developed a right old thing for Simon Kernick and his thrilling page-turners.  They’re rarely for the faint-hearted and tend to include quite a bit of gore, plus he nearly always kills of the characters you’re rooting for which is a bit of a pain, but also quite good unless you’re sunbathing by a very public pool and you blurt out “nooooooo!”.  Twice.

Severed focuses on ex-army Veteran Tyler who wakes up next to his girlfriend who is….erm….without her head.  We then follow the story of why it is he’s there in the first place and how he goes about exacting revenge on the people who killed her (whilst trying to also keep them happy since they have the power to make him look like the killer) and I ended up really loving Tyler and wanting him to succeed.

I read this book in several hours and I am a very slow reader, so that should give you an idea of how good the story is.

So obviously as I read the last one so quickly I decided to crack on with another of Kernick’s books, and you gotta’ love the dramatic title.  This one followed Detective Milne who is a recurring character in Kernick’s books and this was the second one he featured in.  Milne is a tricky and quite interesting character as he’s someone who is clearly very good at his policing role, but is also a killer of bad guys who he feels have cheated the system.  Is it OK to sympathise with him?  You end up thinking he’s pretty wonderful and as is usual for Kernick’s characters, you end up rooting for him.

A GOOD DAY TO DIE (yes, it needed capitalising because it’s all serious and whatnot) picked up where the first book left off, with Milne having fled the country due to being caught killing (it’s a long story…just read the damn books) and finds out that his close friend/colleague has been killed in suspicious circumstances, so he returns to London to find out what happened.  It has to be said, there’s a special place in my heart for Kernick books because they all seem to take place in my part of Town – North of the River – so I enjoy the fact that I can accurately imagine the scenes unfolding as they’re being described.  If you love a good thriller, I’d definitely recommend checking out Simon Kernick.

As already mentioned, I love page-turners regardless of whether they’re a little on the trashy side (obviously any book that gains commercial fame simply ‘must’ be trashy since it appeals to the masses…) and I happily got carried away in the excitement of all of Brown’s previous offerings including the much-hyped The Da Vinci Code.  The Lost Symbol features “Sexy Symbologist” (apparently they do exist) Robert Langdon opening up doors and being “chilled to the core” by what greets him.  Over 600 pages of this, in fact.

Whilst I didn’t hate it, I did find it a little bit patronising, especially as the big payoff that we’re waiting for never really occurs and the ending was a bit like The Alchemist (which I also found quite patronising) in a “the answer is within you….it was there all along!!!!” way.  However, as with previous Brown books there was quite a bit of food for thought, the story was gripping for the most part and did keep you reading, plus there was plenty of religious-based conspiracy which I always enjoy.  There are times in the book when I felt like Brown is just showing off by blathering on about his clearly impressive knowledge of symbols, conspiracies and religious text, but it wasn’t too annoying for the most part.

The story follows Langdon as he’s summoned by his close friend to give a talk at Washington Capitol Building, yet when he arrives…he realises….that it wasn’t his friend who summoned him…..ooooooo!  On the plus side though, his friend was kind enough to leave his severed hand in the building (it’s a happy coincidence that I read another book featuring a severed limb and not a developing obsession.  Promise) so that Langdon had something to work with when he went up to doors to get all core-chilled.  This was probably my least favourite Brown book but I wouldn’t say it was a total waste of time, just not half as good as his others.

So there we have it! These were the four books I read whilst I was away and I’ve already started planning next years reading list…

I recently mentioned that I attended Avon's Arctic Goddess event to find out more about the new collection. In this...