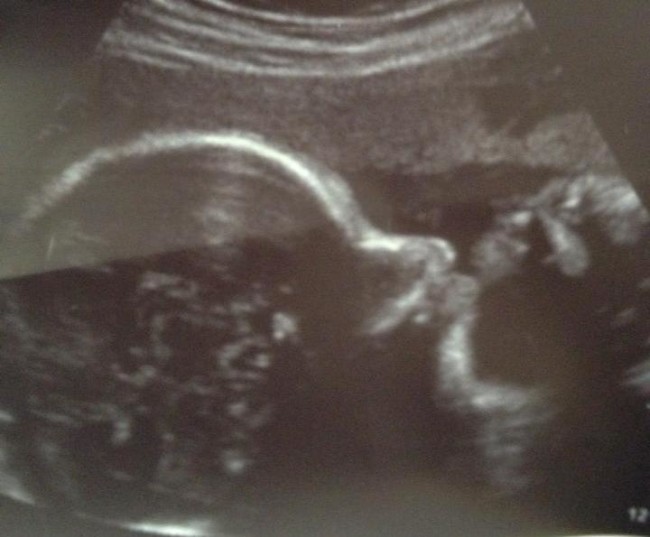 Apologies for two consecutive off-topic posts and the baby theme on the blog today.

Yesterday I turned 29 weeks pregnant which means that next week I’ll be saying I’m 30 weeks pregnant…30 weeks!! I’ve been Googling images of premature births that correspond to where I’m at with my pregnancy (so this week I Googled “premature born at 29 weeks” for example) and it’s pretty shocking just how ‘baby-like’ my Little Man now is!

I had a scan last week and he’s now showing as a tiny bit small again.  Nothing too terrible and he’s still within the normal parameters, but I’m having another scan in 3 weeks to make sure he’s still developing at a good rate.  He’s likely to be a small, fat baby at the rate we’re going, which is fine by me as long as he’s healthy.  He’s currently weighing in at 2.4lbs which is actually a lot heavier than it sounds, and lugging him about is surprisingly tiresome!

Lastly, I felt his hiccups for the first time last week which I thought was him having some sort of fit.  Thankfully I twigged fairly quickly what was going on, and last night when he got them again I got a bit emotional, which is as strange as it sounds.  I think it’s because hiccups is such a human thing for him to do, that it really brought it home that there’s a little, gassy baby hiccuping away in my belly.  He’s still crazy active, kicking like a thug and moving around like nobody’s business.  He was briefly transverse (on his side across my belly – not comfortable for me!) but he now seems to be breech again, which is fine as I’ll be having a C-Section, the date of which is almost certainly going to be 7th November, meaning I’ll have him at exactly 39 weeks.  However, I might ask my doctor if I can have him on the 5th so that every year on his birthday, people are having parties and letting off fireworks…but I haven’t completely thought that one through yet so don’t quote me!

It's going to be a bit of a pregnancy themed day on the blog today, as shortly after I finish...