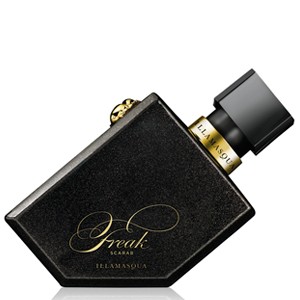 Illamasqua have extended their fragrance range to include an addition to their line of Freak perfumes.  This launch is called Scarab, which is marketed as a decadent and captivating unisex scent.  Scarab is actually a dung beetle perceived as sacred in ancient Egypt; whenever you see the beetle image on Egyptian artifacts then it’s likely to be a Scarab.

The notes of Illamasqua Freak Scarab are:

Davana Oil, Egyptian Jasmine, Honeysuckle and Queen of the Night

As you can see, it’s quite an interesting sounding fragrance.  I’m especially intrigued by the fact that the base notes contain such heavy and full elements, so I’m guessing Scarab probably dries down in a similar way to the original Freak and develops fully through the base notes.  I also love the inclusion of leather as, if used correctly, it can give the dry down a lovely strong bite, so hopefully the fact that it’s listed last doesn’t mean that it’s there as a token gesture and instead makes for one of the stronger notes.  I haven’t had a chance to smell this myself, but I am a huge fan of the original Freak, so hopefully this one will be just as unusual, just as special and just as original as it’s older sister.  Available now priced at £85 for 75ml from Illamasqua here.

An Assault on the Senses

As promised, here is the competition to win one set of seven lippies from NYX.  The prize includes: 3 x...