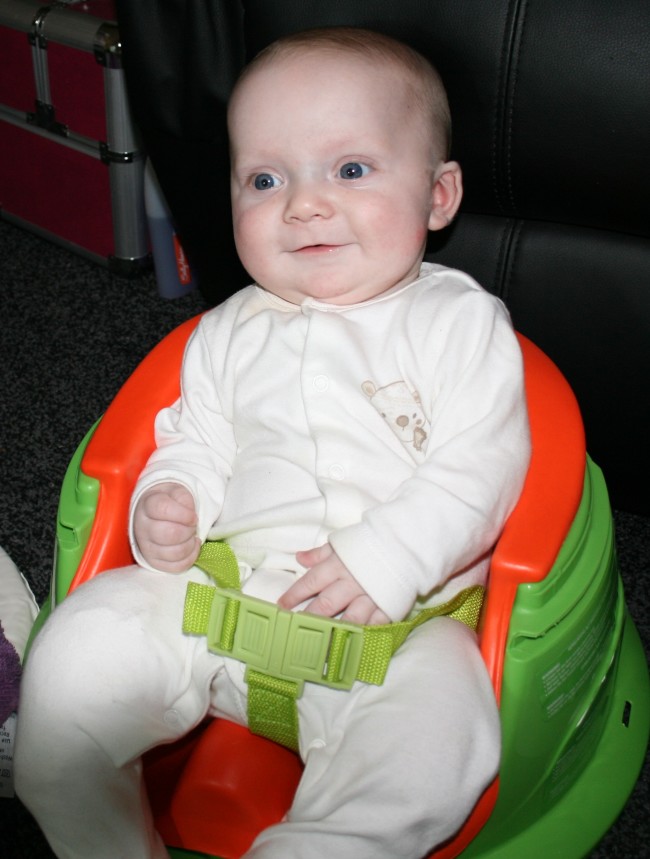 Today my little fella’ reached 16 weeks old, which some would perceive as 4 months old, however, some also count age by the month – so as he was born on the 7th November he won’t be 4 months old until the 7th March – but whatever! He’s now 16 weeks old and he’s such a gorgeous little boy, I am extremely proud.  As this is a bit of a milestone for him and I, I’ve decided to really indulge today and have the next 2 posts devoted to all things baby, so there’s a Teddy special of Instagram Weekly coming up, and a review of some amazing products I’ve been using on him.

Teddy is now well over a stone in weight and over two feet tall making him quite a big baby already! Thankfully it’s all balanced out and he isn’t fat, which is a big risk at this age.  He’s cooing and babbling lots – he’s extremely loud when he gets going – and he smiles and laughs all the time; he’s an outrageous flirt and smiles at absolutely anyone who locks eyes with him.  He’s got a fabulous temperament and is very laid-back.  Sleep wise he’s sleeping anything between nine and twelve hours at night; on the day of his 10 week birthday he slept about eleven hours and has been thankfully pretty consistent ever since.  It was weird as it was very sudden; he went from sleeping at most five hours a night to suddenly sleeping over double that which was a big and wonderful surprise! Apparently it’s all about how big their stomachs are; if they’re big enough to hold a good load of feed then they can sleep longer, so you’re waiting for your baby to reach a certain weight before the through-the-night sleeping occurs.  Some people think this is 11lbs, others say 13lbs, but I think Teddy was around the 11lb mark when he started longer sleeps.

When he first started sleeping through the night I wasn’t sure what he should be doing during the day and for a few weeks he was staying up pretty much all day which was hard going because there are only so many times we can dance to Jump in the Line by Harry Belafonte before the novelty wears off for all involved.  Thankfully we’ve got a napping schedule in place so he’s never up for longer than 2 hours at a time (sometimes even 1.5 hours) before having a nap that can last anything from half an hour to an hour and a half.  Usual he has one in the morning and three in the afternoon, the second of which is usually quite long.

I’m mentioning all this as I think it might prove handy for other new mums to read; I realise it’s probably quite boring for everyone else! Physically he’s now got complete control of his head, he’s close to sitting up and he can roll over with moderate ease.  He occasionally throws himself into a roll which involves him launching himself off of my lap and on to the bed.  It’s all going so well and I really hope it stays this way as he’s the most amazingly joyful baby who is so much fun to hang out with.  I’m trying not to flood the blog with too much baby stuff, so I’ll update again at 6 months.

It's that time again when super cheap make-up brand ELF go even cheaper by offering us a 50% reduction if...