An Introduction to My Sqoom Device 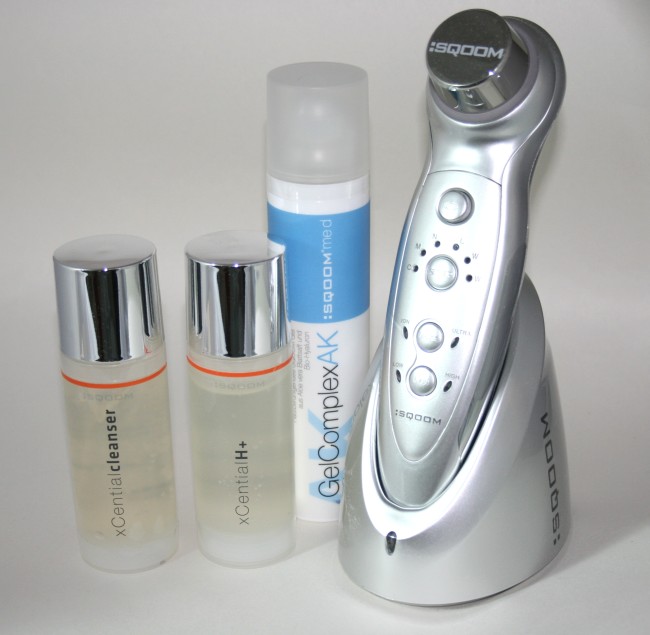 In the past couple of weeks, for the first time in possibly my entire life, people have commented positively on my skin.  Don’t get me wrong, it’s nowhere near perfect – certainly not at the moment since I managed to muck it all up by introducing a moisturiser that was completely wrong for my skin type and consequently caused me a major breakout *shakes fist at Jurlique’s Soothing Moisturising Cream* – and I still have extremely bad scarring as you may have seen in recent ‘before’ images in any of my posts on base products, but the spots are easing up (I even had almost a full week spot-free before the introduction of aforementioned moisturiser; let’s call it “Moisturegate”) and my overall skintone is improving; the clarity is much better and the biggest difference so far is the reduction in pore size; if you’ve spent years battling pores then this is the device for you!

So what is the Sqoom? It’s all very scientific and technical, neither of which I’m particularly good at describing so I’ll instead give you an idea of what you need to do.  It’s a combination of vibration and ultrasound – neither of which you can feel – that force skin channels to briefly open allowing products to penetrate much further than typically superficial application.  The Sqoom is used alongside gels that are designed to treat various skin conditions (surprise, surprise, I’m currently using the AK Gel for spots) and the device itself has six different settings and I’m currently only using three of the settings; cleansing which is done with the cleansing gel, wrinkle-reduction which is the setting I use with the AK gel and lastly massage, which isn’t something I’ve been told to use but I’ve actually used it to work in a moisturising mask during a facial and there was pretty much no mask left on the skin surface after one 4 minute session; impressive if you consider there’s usually always quite a bit to wash off, but there was literally only a trace film, if that.

The downside of the Sqoom, for me, is that you can’t actually tell if you’re doing it right or not; obviously I am as you can see a marked improvement in my skin, but I could’ve been spending weeks doing these treatment incorrectly without realising it.  It’s also a bit of a faff as you have to cleanse for 4 minutes in the bathroom and then do a 4 minute treatment with the gel on each side of the face, so 12 minutes a day.  The first couple of weeks I thought I could get away with just doing a treatment and not a cleanse, but you absolutely need to do both; once I started doing both, my skin really showed improvement within literally a couple of days.  Thankfully the 8 minute treatment can be done in front of the telly, and once you start up you don’t really need to concentrate as it becomes second nature very quickly.  Lastly, you do get through a lot of gel and it is quite expensive; the cleansing gel is £25 and the treatment gels are £79.  As I’m tackling tricky skin, I’m treating daily but there’s a lot of flexibility in the treatment; you can go for a couple of times a week or every day depending on what sort of results you’re seeking.  I’ll go on to a 3 times a week maintenance program once my spots are under control again which shouldn’t take too long.  I’ll report back with how I’m getting on in a few weeks, but in the meantime, if you fancy finding out more about how the device works then head here – link – and to purchase the device head here – link – where you can buy the starter set for £549.  I’ll be writing up a more thorough post on the device itself soon.

You may recall a little while ago I mentioned that I'm on a mission to try and get into better...