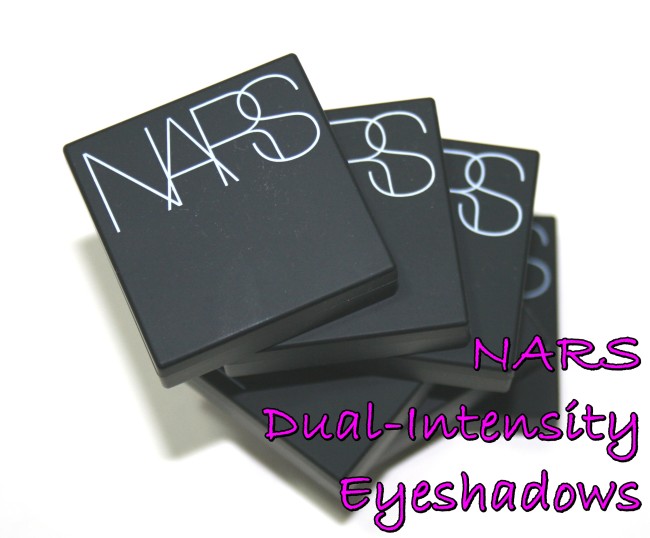 As mentioned in my quick intro post to the NARS Dual Intensity Eyeshadows, I’ve been having all sorts of fun with these lovely new releases, of which I currently have six.  I won’t go into too much detail about the full range as you can read my intro here, instead I’ll share my personal views on the colours along with swatches of the six shades I have, and a couple of looks achieved with the shadows…so it’s going to be a bit of a long post!

First up, unfortunately the two shades I was most excited about I didn’t manage to nab, so they are most-definitely on my wish list and they are Desdemona -described as a rich, shimmering burgundy and Phoebe which is said to be deep shimmering amethyst.  I’m loving jewel tones at the moment which these shadows embody perfectly with their high shimmer finish, plus burgundies and purples work really well with my eye colour!

The other four shades not in my stash are: Andromeda – alabaster, Cassiopeia – iridescent electric pink, Himalia – shimmering topaz and lastly Lysithea – shark grey.  There is quite frankly not a shade there that I wouldn’t be able to make use of, so it really is an impressive launch of colours.  I haven’t noticed a huge amount of difference between the wet and dry effect other than a thicker finish, but the swatches are done using my fingers which doesn’t give the best finish for demonstrating the difference.  There is a Wet/Dry Eyeshadow Brush as part of the range which I’m sure will deliver more of a difference.

First up we have Callisto which is a rich, taupey shade that I think everyone will love as it’s very wearable and works well as a base for more dramatic looks.

Next is Dione which is quite similar to Callisto – at least it is in the pan – although it’s missing that purple undertone that Callisto has, making it a much more neutral brown shade.

Europa is a pale peachy shade that looks quite chalky in my swatches, but that’s due to my rubbish photography not capturing the light properly as this is a gorgeous shade that does that wonderful thing to eyes by making them look brighter and lifted without overly made-up.  It’s very natural and people will say you look well rather than that they like your eye make-up!

Above are the three lighter shades, now on to the darker shades starting with Giove, which is a beautiful rich, deep navy that I’m absolutely gasping to use, but I can’t see it suiting me unfortunately.

Next is my favourite of the six I have which is Subra; this is a black with red and brown undertones that make it almost chocolately with a hint of red.  I find it looks more red in the pan than on the swatch, but it’s a perfect shade for those who like smokiness without using black.  I love this for lining eyes.

Lastly we have Sycorax which is the darkest of the entire set as a truly pigmented black with just enough sparkle.  It’s another great liner shade, but if you have the courage this would look amazing all around the eyes as a smudgy, grungy eye.  Teamed with something like NARS Turkish Delight (which I picked up earlier this week…) you’d be left with a fabulous 60’s style make-up look.

At the launch for these I had the shadows applied by a member of the NARS Artistry team who applied Himalia all over the eye and Desdemona into the socket.  This is a good example of an amazing make-up look that I haven’t a hope in hell of achieving myself! In the pictures, the middle and right one are taken in front of my daylight lamp so you can see the full effect of the metallic shimmer finish. 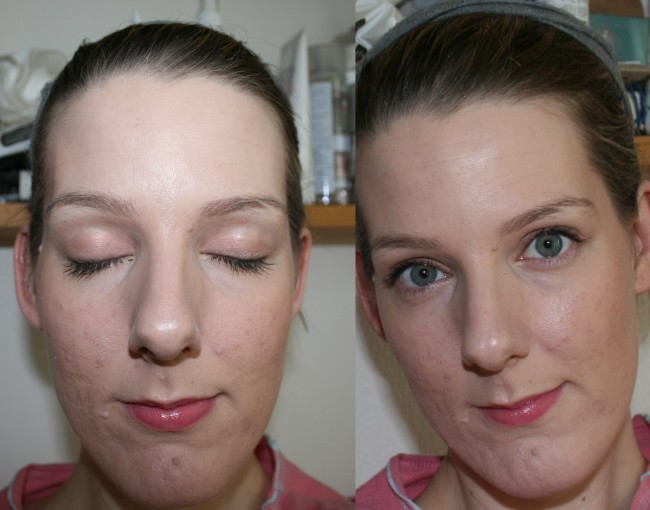 Next is my first attempt with the shadows which was a very natural look.  Sometimes I don’t bother with eye make-up at all and sometimes I just want some very gentle enhancement which is what I wanted to try with these; they’re such a strong, vivid punchy shadows with high shimmer, so I wanted to show that you could achieve a very natural finish too! Unfortunately I didn’t notice the mascara lump until I started editing the pictures.  In the above image I have Europa all over the lid and blended out plus Subra used as a liner along the upper lash line. 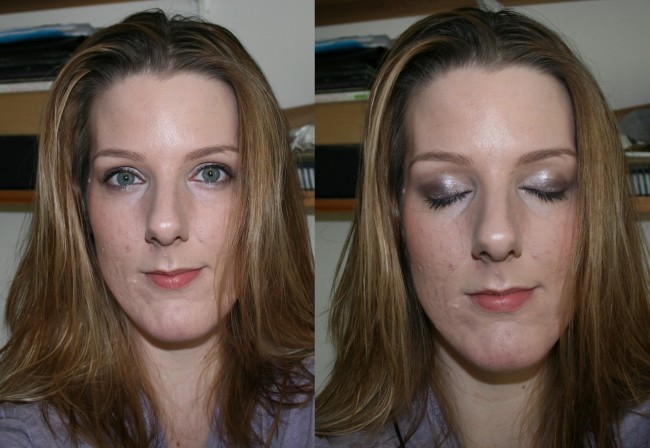 Last we have my favourite look which was kind of like a daytime smoky eye.  I used Dione all over the eye and under the lash line before blending Sycorax on to the outer corner and worked it towards the inner corner on both the upper and lower lash line.  I also used Sycorax as a smudgy liner on the upper lash line.  As you can see Sycorax blends out amazingly and works to add definition without looking too dark or grungy.  Plus, you can turn this into a night time look by adding some kohl to the inner lower lash line making this a great look for a quick day to night transformation.

As you can see, the NARS Dual-Intensity Eyeshadows are extremely versatile, easy to use and create a beautiful finish. They all come housed in lovely mirrored cases, can be used as shadows and liners, plus they can be built-up to an extremely strong metallic finish or sheered out to just a hint of colour.  They’re available already from Space NK here – link – for £21 a pop, whilst the Wet/Dry Brush is £24 here – link.  At the start of August they launch nationwide.

When the sun is out, nothing compliments the wonderful glow quite as much as beautiful, vibrant lips and tips.  The...