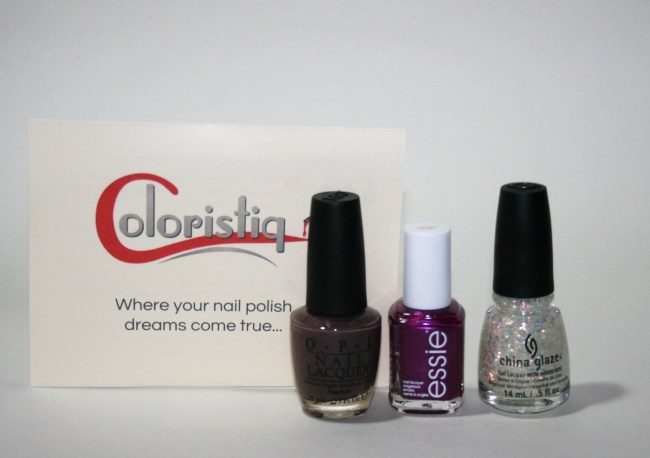 Here’s an interesting concept for anyone who’s prone to polish hoarding, how about a service that sends you out a regular supply of new and on-trend shades (or even just shades you like) that you then have a play with before sending back and awaiting the next sendout? It’s an interesting idea with some great aspects as well as a couple of things that might go against it.  Let’s take a closer look at the service itself.

Coloristiq is a nail subscription service that costs £14.49 (including P&P) and involves sending out 3 shades of polish from the 4 brands currently available – China Glaze, Essie, OPI and Morgan Taylor.  You start the process by creating a wish list of shades and I believe the shades are chosen directly from the wishlist.  You are then allowed 3 applications from each shade (so 9 applications in total from all 3 shades) before you need to send the polishes back, and so the circle continues.  When the polishes arrive back at Coloristiq HQ they are carefully inspected and the outside bottle is sanitised (the inside doesn’t need to be as the chemical composition of polish is self-sanitising apparently!) and carefully weighed to ensure fair usage.

The good points of this service are that it’s a fantastic way of trying new shades and experimenting with colours without buying a new polish each time.  Honestly, how many of us have managed to use up an entire bottle of polish? It doesn’t happen often does it? I certainly haven’t and I can see the appeal of being loaned polishes.  Also, space-wise it’s a bit of a dream as at the last count I had over 400 polishes (!!) which is ridiculous as even if I were to change my nail polish 3 times a day I wouldn’t have a hope in hell of using them all up before they get their gloop-on.

For me, there are a few downsides to the service.  Firstly, I think it’s a shame that you can only ever be sent 3 polishes in 30 days as I think it would be better if you could receive a new polish sendout every time you sent them back.  This could still be administered via a fair usage approach – for example, no more than 3 sendouts a month, but at the moment you are paying £15 a month for the use of 3 polishes which I think might lose it’s novelty quite quickly.  That brings me to my next point which is the fact that I think £15 is quite a high price point for such a service and around the ten pound mark would be better.

In conclusion, I think this is a great idea and if you’re thinking to yourself “but I like to own polishes!” then how about this; you try them through the service and any you really like, once you’ve tried them on your nails a couple of times, you then buy.  I’m guessing in the long-run you won’t end up buying many – just some real favourites – which will work out well for both your drawer-space and your wallet.  I’m pleased to see that there’s currently a deal on until the end of the year with the sub price being £9.99, so if you want to get involved, it’s well-worth acting now.  Head here – link – for more info.

The GlamGlow Supermud mask is one of my all-time favourite masks - honestly, every time I use it I'm reminded...