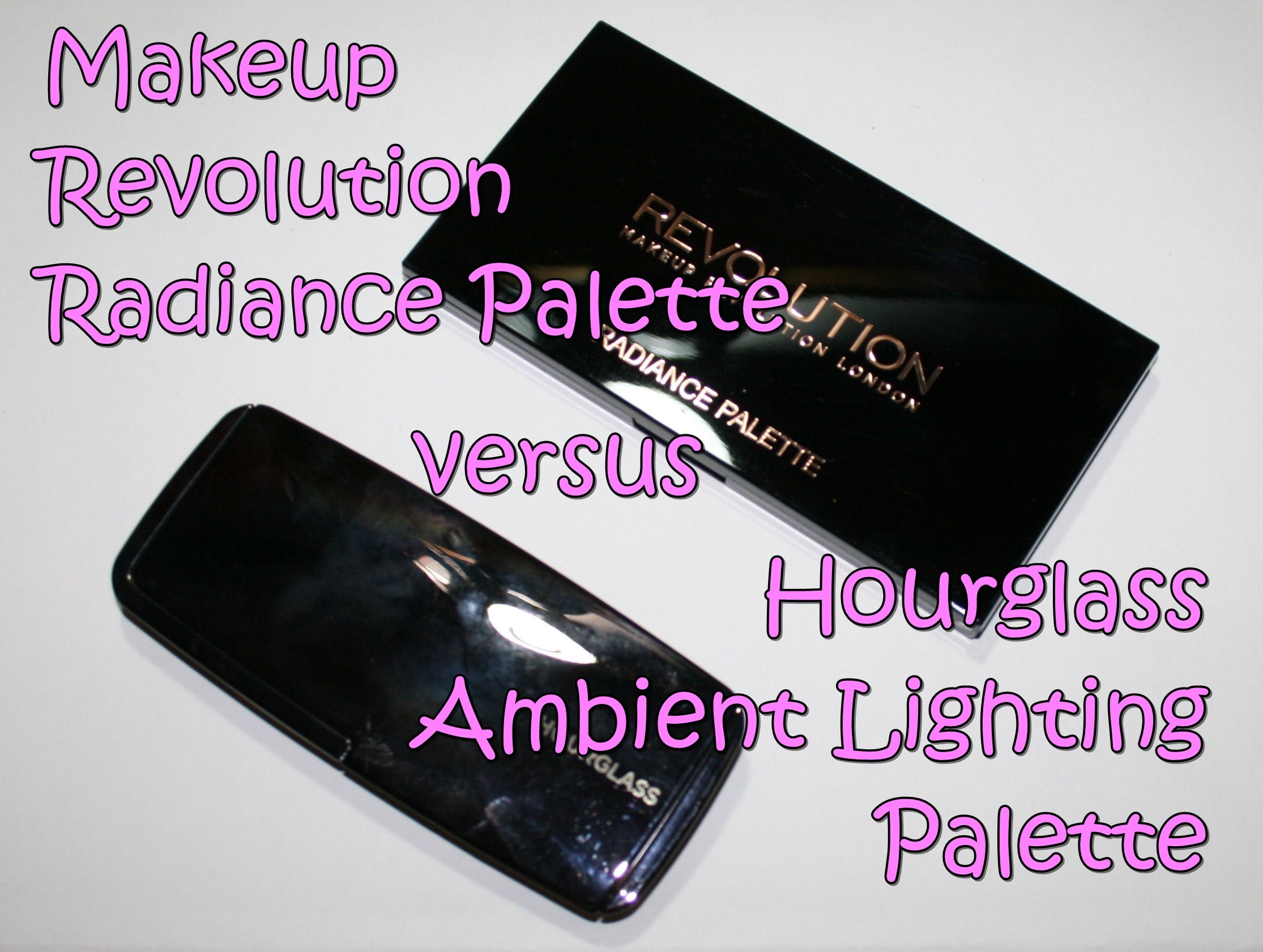 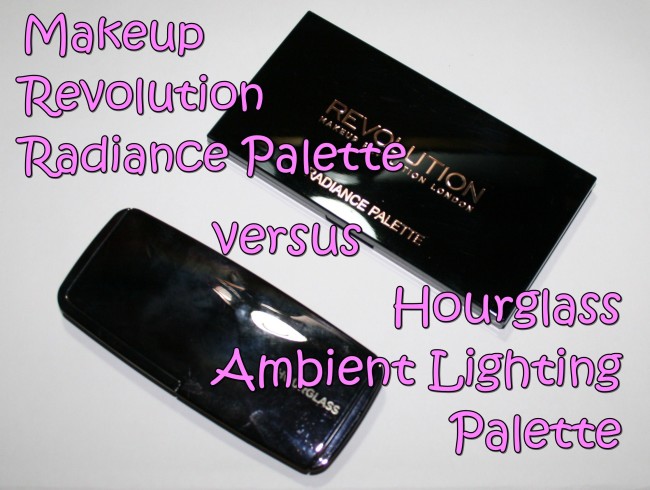 I had a (completely unnecessary yet very, very wanted) Makeup Revolution binge last week that included all shades of the *amazing* new Lip Lavas – more on that soon – and the new Radiance Palette which is a trio of highlighters.  I use heavy coverage products which can leave my skin looking a little flat, so highlighters add light to my face and stop it looking too one dimensional.  Consequently, I have worshipped at the feet of the infamous Hourglass Ambient Lighting Powder ever since my investment in the trio palette last year. 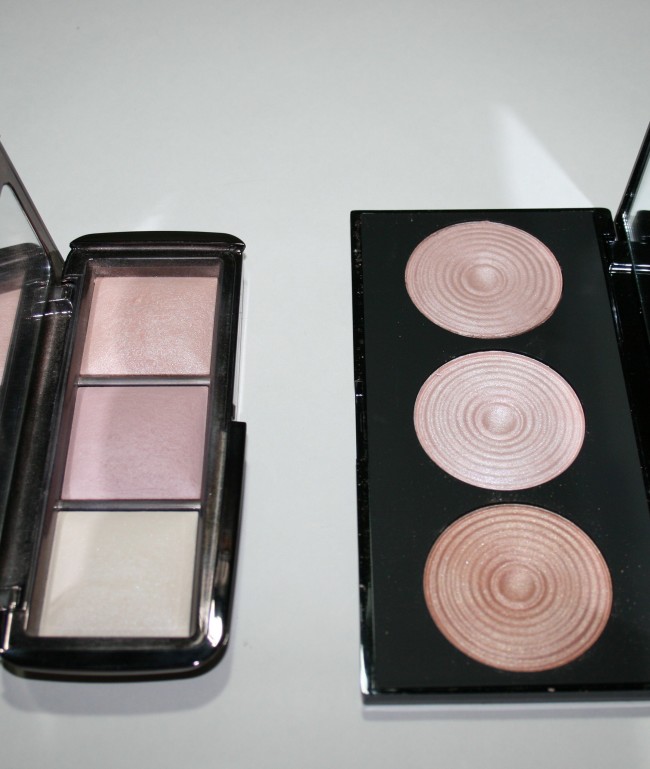 As soon as I first got wind that Makeup Revolution were releasing a Radiance Palette (there’s also a Highlighter Palette in the range which contains three lighter powders) I immediately thought of how it might compare to the Hourglass Ambient Lighting Palette.  Normally such a thing wouldn’t occur to me as, let’s face it, we’re comparing a £8 palette against an a £56 one, so there should be no comparison, but this is Makeup Revolution we’re talking about, and one thing they do so, so well, is dupes! 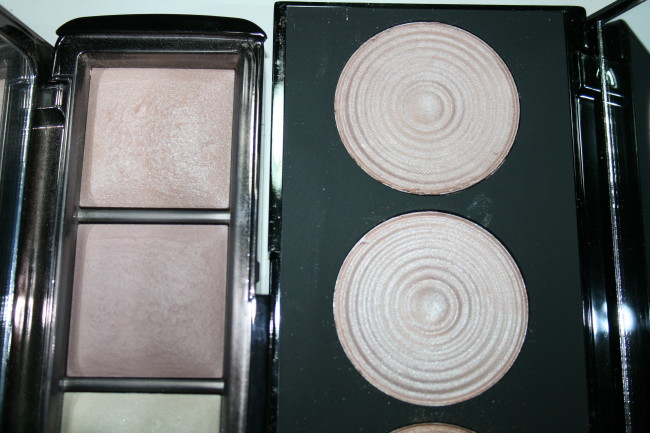 First things first, the shades; the Makeup Revolution Radiance Palette contains Breathe, Exhale and Glow which I’m assuming are left to right – I’m not 100% on this, so for the benefit of this post, that’s what they’ll be! Comparatively I’m only focussing on the first two shades of Breathe and Exhale as Glow is a little too different to the final shade in my Ambient Lighting Palette.  Also, don’t forget that my Hourglass palette is a bespoke palette so the three shades included will be different to the more traditional shades found in the palette.  The three shades I have are Luminous Light, Mood Light and Diffused Light, but we’ll also be ignoring Diffused Light as it’s too different to Glow.  So we’re pitting Breathe from MR against Luminous Light from AL and Exhale from MR against Mood Light from AL. 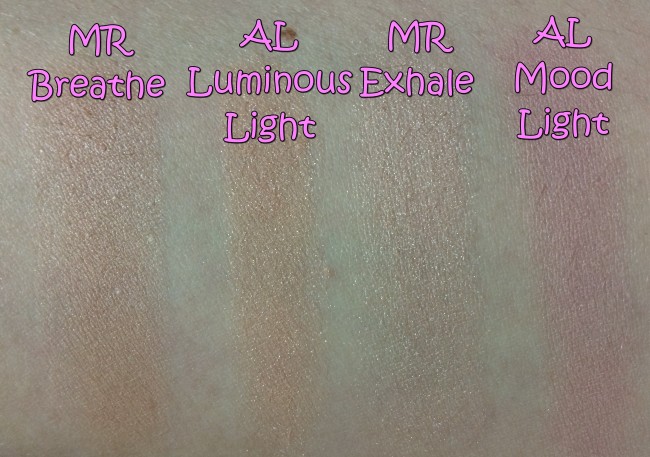 Let’s look at Luminous Light versus Breathe, which are both relatively traditional, mid highlighter shades.  They both lean very warm and have a glowy, orange hue.  If I had to guess from looking at the swatch which one is which out of the two left shades, I’d guess the far to left to be the Hourglass shade, wouldn’t you? However it’s actually the Makeup Revolution powder which, as you can see, is shimmery without sparkle and therefore a great glow-giver.  Of the next two shades, MR’s Exhale versus Hourglass’ Mood Light, they actually swatch up to look quite different with again the Makeup Revolution shade being on the left and the Hourglass on the right.  Out of these two I’d say the MR shade performs better as a highlighter, whereas the Hourglass shade looks more like a blush/warmth-giver.  What’s amazingly interesting about pitting these two palettes against each other is just how close they are in consistency and payoff, thus proving that you really don’t need to spend a lot to get that luxe, lit-from-within glow.  It’s a total recommendation from me and you can find the Makeup Revolution Radiance Palette for £8.

*Both palettes purchased by me.

Sensationail StripGel Peel Off Base Coat

Dehydrated Skin? Here’s the Range for You!

The latest Boots campaign is designed to encourage us to embrace the excitement we get from a new beauty product....