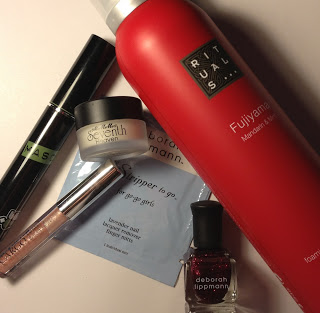 Tis the day for writing up reviews of this month’s beauty boxes and next up is Glossy Box.  They’ve taken a break from their usual pink box and packaging and instead, December’s box was a festive red.  Please excuse the difference in lighting in some of the pictures, I took some at home and some elsewhere when my home bulb blew.  Here’s a run down of the contents:

I’ll start with the product I’m most pleased to receive, which is a full size Blink mascara.  I keep getting Blink and Blinc confused as they seem to both be brands that focus on the eyes!  I’m yet to try this mascara, but I’ve read some really positive reviews so I’ll definitely give it a go.  I’m lucky to not need a long-lasting or waterproof mascara, which means I usually avoid them, so it’ll be interesting to see how easy this is to remove as I often struggle with the removal of long-lasting mascaras.  This retails for £14.99.

Cargo are the brand who arrived on our shores with a lot of excitement due to their mascara that included a lash lengthening treatment in the formula.  I think I’ve said this in other box run throughs, but I’m not really a lipgloss fan as I don’t see the point in sticky, shiny lips that don’t last long; I’m more of a balm person.  The shade I got is Las Vegas and the gloss itself is nice, doesn’t feel too sticky and is in a pretty, sparkly and very seasonal shade that would work as a beautiful neutral with a smoky eye.  I have naturally very red lips, so anything sheer ends up looking a lot redder on my lips than it does on others, so for a more accurate idea of the colour, have a look at the swatch on my hand.  I ‘think’ the sample included in this box is full sized, but this lipgloss has recently been reformulated (so I’m guessing it might replace the Blu Ray lipglosses they currently have) which means I can’t seem to find it elsewhere online.  So the full sized version of this retails at £10 but I’m not too sure whether the full sized is larger than the one I received.

I really love this fabulously festive shade.  Included in the box we got a sample of this varnish plus a sample sachet of Deborah Lippmann’s remover.  Apparently it’s some sort of mitt that makes it much easier to remove varnish, so it’ll be interesting to see how it works, especially on glittery varnish like this one which is notoriously difficult to remove.  In the picture, I have this on over the manicure I got last week (see full picture here) so I’m yet to try it on bare nails, but I do really like the colour so I’ll definitely be trying it out soon; more than likely on my toes as I think it’ll look gorgeous on them too!  The varnish retails at £14 for a full sized and a pack of 6 remover sachets retails for £16.  I don’t know what size the sample is, so I’ll guess it at half sized which would make the sample worth £7 and the sachet worth £2.70. 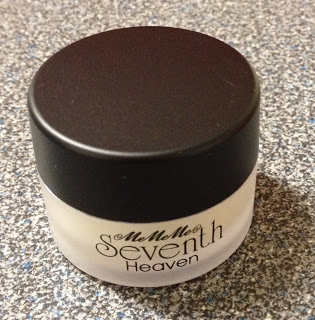 I do love how MeMeMe blatantly rip off other more expensive brands (if other brands are going to charge huge amounts for something that MeMeMe think they can inexpensively reproduce, why shouldn’t they?) and this Seventh Heaven is no exception.  It’s referred to as a Face Base and the only other brand I can think of that have a Face Base is Bobbi Brown.  It’s used as a moisturiser and pre make-up primer.  I’ll definitely be giving this a try to see if it measures up.  Full sized this retails at £15 for 30ml and the included sample is 10ml meaning it’s worth £5.

I don’t know if Rituals are new or not, but I’ve gone from having never heard of them, to suddenly seeing them everywhere.  I think we all got different versions of this foaming shower gel, and the version I got in my box is ‘Fujiyama’ which is mandarin and mint scented.  On first impressions, this smells good and the pamphlet promises to leave skin silky soft, so I’ll give this a go and see if it does.  The sample included in the box is full sized which is priced at £6.50.

So there’s quite a nice selection of goodies in this month’s box, made extra festive by arriving in Christmassy red.  The total value for this box comes in at around £40 which is not the most expensive box this month, but still pretty good, considering the great products included.

This morning, the December Carmine box arrived and included some lovely goodies.  I've now got all four of the main...