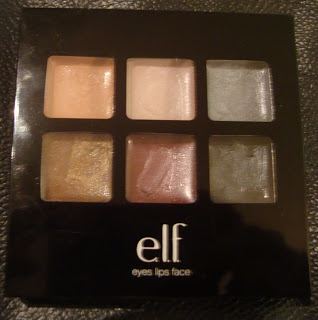 I go through phases where I prefer powders over creams and vice versa. Sometimes I’ll prefer the dewy glow of a great cream blush, other times I’ll like to neat flush of a powder. I’m the same with eyeshadows and I’m currently going through a cream eyeshadow loving phase.

I decided to try out the e.l.f. Cream Eyeshadow Palette as it appeared to have a nice selection of colours and I haven’t tried any e.l.f. cream eyeshadows before.
The packaging is really lovely and comes in a windowed black container so you can see the 6 eyeshadows. Inside there’s a mirror in the lid of the compact and a little applicator brush. 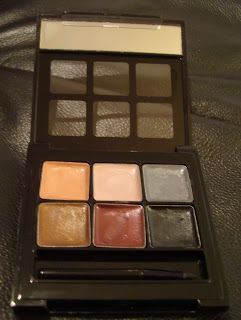 The shades are actually much nicer on the skin than they look in the palette and the pigmentation is surprisingly rich. All the colours are flattering and I’m really impressed with them. However, what I’m not so impressed with is the consistency; they are so oily that within minutes they’re all over the eyes. This isn’t too much of a problem with the lighter colours as it doesn’t show too badly, but with the darker colours it just doesn’t work. I haven’t tried them with a primer, but basing it on the consistency alone I’d say that the darker colours are best avoided.
The lighter colours would work really well as highlighters if well blended and for the price this isn’t a terrible investment; the brush is lovely and works really well used with my Bobbi Brown Long-Wear Cream Eyeshadows, although it’s very small.

I doubt I’ll be using this regularly (other than for highlighting) but I’m not displeased I purchased it as having a selection of 3 different coloured highlighters for a couple of quid isn’t a terrible thing.

Tightlining the Eyes – A Brief Introduction

Tightlining the Eyes – A Brief Introduction

I mentioned on Twitter how I'm really pleased to have come across an eyelining technique called tightlining and a few...