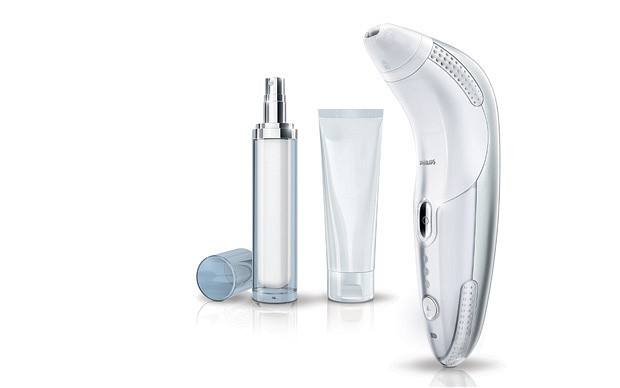 I think it’s probably best if I start by apologising for the length of this log as I’m pretty certain it’s going to be on the long side as there’s quite a lot of information to get through!

Last night, I experienced my first treatment with the ReAura and to say it was an eye-opener is putting it mildly. Having had pretty much every salon-standard skin treatment you can think of – including various peels, microdermabrasion and two different types of lasers – I was really looking forward to trying the ReAura to see how it measured up. Whilst I was excited about experiencing the ReAura, my cynical side was wondering how it would be possible for a home laser to be anything like the powerful in-salon lasers I’m used to experiencing. At this point, it’s worth mentioning that I have really tough skin that doesn’t react to anything; no chemical or mechanical treatments cause it to go red or tender and I believe this is due to years of pushing it’s tolerance to the limits with the various ways I’ve tried to treat my acne.

After reading the really comprehensive instruction manual, I was certainly more confident but still a bit worried that I wouldn’t get the process right. However, this was eased when I watched the included DVD, which features a very nice – if mildly patronising – woman who talks us through how to use the ReAura. After watching the DVD I felt reassured and decided to crack on and give it a go.

I started by removing all my make-up, then applied the included gel, which functions as a lubricator to help the device move evenly over the skin. By this point I’d completely charged the ReAura, so all I needed to do was connect the tip (which is kept separately from the device for safety – without the applicator tip in position the device won’t work) and start the laser. A couple more safety features worth mentioning; firstly, the laser won’t start until the applicator edges are both firmly in contact with the skin and secondly, the laser doesn’t start until the device is moving. So both these things need to be happening before the laser starts. When the ReAura is in position, the tip will light up to let you know, but that doesn’t mean the laser is in progress, just that you’ve made effective contact with the skin. As you can see, there’s a lot of safety features in play to make sure you don’t accidentally laser somewhere you didn’t intend to. When the laser is in progress, the sides of the device light up green and the machine makes a buzzing sound. However, these two factors, whilst helpful, are largely irrelevant as when the laser starts, you’ll know!

A while ago I was talking to a beauty therapist about laser hair removal and she said that the best way she could describe the feeling was like either being flicked by a rubber band or repeatedly stung by baby wasps (how she knew what that felt like I don’t know) so if we keep with similes, replace the baby wasps with hornets and that’s pretty much how it felt. Yes, it sounds horrific and it was quite a shock, but it is by no means unbearable and I confidently used the device with a ‘grin and bear it’ approach. It’s worth noting at this point that I’m counting down the hours until I can treat again and believe me, I’m rubbish with pain so if it were that bad then I wouldn’t be willing to do it again!

You treat your face with the ReAura by sectioning the skin into three zones; the forehead, then the left side and the right side. I found the forehead to be the easiest to treat and the least uncomfortable. I really struggled to get the laser going along the bridge of my nose as it’s quite a thin area and hard to get the edges of the applicator tip to line-up properly, but I didn’t find it too difficult elsewhere. After each zone is complete, the device bleeps to let you know. I really like this as it’s much easier than trying to time it, especially if you’re new to the device as the zone complete bleep will only occur once the zone has been completely covered rather than when the time is up.

After the ReAura laser made contact with my skin, I went the reddest I’ve ever been (cue “Who ordered the lobster?” jokes from the boyfriend; I then put a tiny bit of gel on his cheek and lasered him which quietened him down considerably) and I was astonished because, as mentioned earlier, my skin just doesn’t react to anything! My skin looked like I’d spent an entire day, suncream-free, facing the sun. All the pigmentation in my skin appeared as if it had stood to attention and everything looked magnified. Not the best look, so if you’re considering buying this then I’d suggest doing it when you’re not expecting company. I actually found it a lot easier to treat my skin using a hand held mirror as it gave me the flexibility to contort my face into positions that I could only really view in a moveable mirror.

Once all zones were completed, I removed the remaining gel with a cleansing wipe (arguably the best feeling I’ve ever experienced; anything to cool it down!) which slightly cooled my skin, but it still felt very hot and sensitive. I applied the included post-laser cream (which, as a side note, is really fantastic as it feels very moisturising yet also very light – normally with moisturisers I find you have to choose between the two) and checked out my skin in the mirror. Yup, still neon. I’d say it was 2-3 hours before my skin started to calm down and feel less sensitive to touch. One thing that’s interesting (even now; 24 hours later) is that you can see the parts of my face that I missed with the laser (obviously I inspect myself in the mirror with a much more critical eye than other’s do; I hope), so during my next treatment I’ll be more careful at making sure every inch of my face is lasered. Which brings me nicely to what you can and can’t treat with the ReAura: the rule of thumb is that if you can feel bone behind it, you can treat it. So the area around your eyes where there’s bone you can treat, but the hollows you can’t. You can’t treat your lips either, but all other skin is treatable.

At bedtime I used another cleansing wipe before applying another layer of of the post-laser cream. By this point, my skin was almost back to normal; it still felt a tiny bit sensitive and looked a little flushed, but neither were significant. This morning everything is completely back to normal and my skin looks just like it does after a facial; glowy and clean. This is probably just me seeing things, but I swear the pores on my cheeks look smaller! This isn’t something ReAura have mentioned as a possible effect, but you never know; I’ll update as I go along. It’s worth noting that the ReAura treatment has the most impact under the skin (where you can’t see) as opposed to on the surface, so it’s not the sort of thing you see immediate benefit from, but the guidelines suggest that you should start seeing some effect after a few weeks (when treating twice a week – which is the suggested optimum treatment program, any more could halt progression and any less is not enough to move things forward) and things will become more obvious from the fifth week onwards.

I think the ReAura is something that you need to be really familiar with before using. It’s not a fad and not something you can randomly use here and there and expect to benefit from. It’s a serious treatment program that has been designed to mimic the effects of in-salon lasers, so I really can’t wait to see what effects it has on my skin.

To Read my introductory blog to the ReAura click here.
For the Philips ReAura site click here.
*Press Sample*

The ReAura is an at home laser device that you can use to treat general signs of ageing like fine...