It feels very strange typing 2013 already!  I’ve just returned from the Nails Inc S/S 2013 showcase and my head is swimming with info as there are sooo many new releases.  SS13 is all about textures, so just in case you thought everything that could be achieved with nail textures has been done already, you were very, very wrong!  Expect this to be a long and picture heavy post… 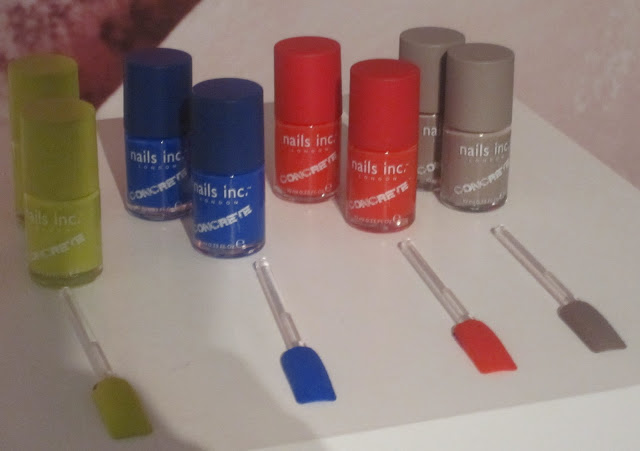 First up we have the Concrete collection of four shades that dry to a matte, “concrete” finish.  Just to be clear, the name Concrete is a reference to the finish and not the weight of the polish! The four shades are Marble Arch (red), Stonehenge (blue), London Wall (nude) and Monument (lime).  I picked up London Wall and Stonehenge so expect NOTDs with those two soon.  The finish is really interesting as it’s a little grainy and very, very matte.  It’s definitely different to the standard matte and I absolutely love the colour range.  These will launch in December for £12. 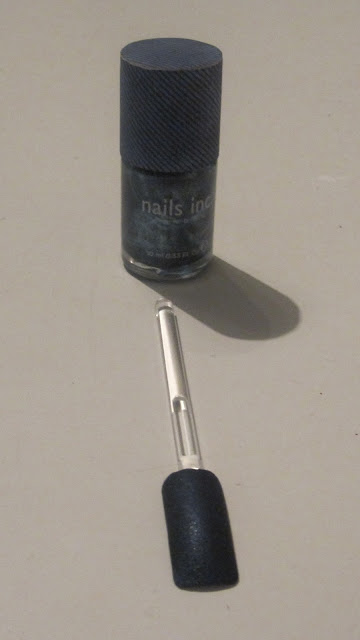 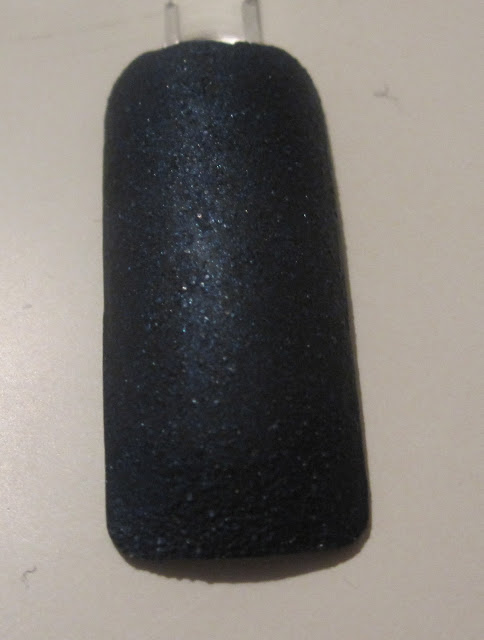 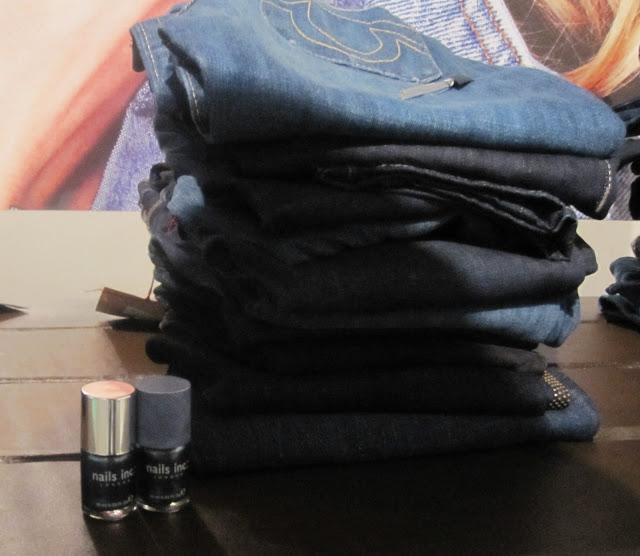 I loooove this polish! It’s not only denim in colour but denim in finish too.  It’s a denim blue (obvs) with a swirl of a lighter blue that accurately captures an indigo denim finish.   This comes as part of a kit that contains star embellishments, but we’ll have to wait a while for its arrival as it doesn’t land until June 2013 priced at £19. 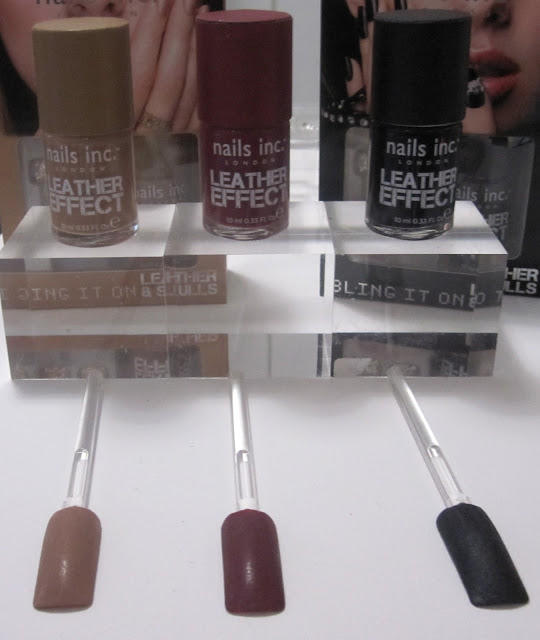 The finish of this collection, as the name suggests, is leather, and the shades are all leather-like shades to stay in theme, so you have Shoreditch Lane (mulberry), Soho Mews (tan) and Noho (black).  The finish of these is fantastic and these were apparently the most popular choice for manicures among bloggers at the event.  These will launch in March 2013 for £12. 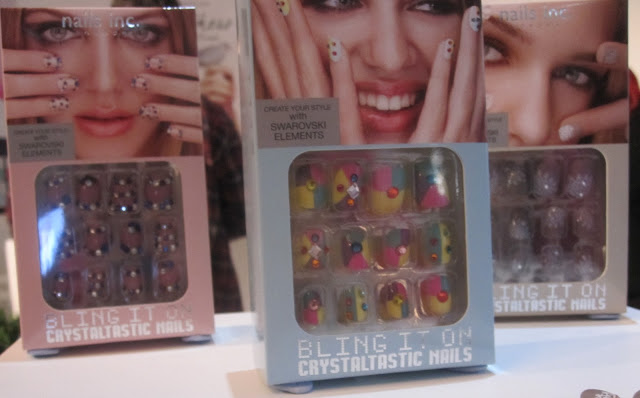 It was about time Nails Inc did their take on fake nails and here they are! Obviously, they’re not just any old fake nails and instead they all feature beautiful, crystal designs and come with nail stickers rather than glue so you can easily reuse them.  The crystals are genuine Swarovski crystals, so the price of each set varies depending on how many crystals are used.  They’ll be launching in March 2012 and the price range is from £20 – £45.  Sadly, my favourites are the multi-coloured ones which annoyingly come in at the top price range of £45. 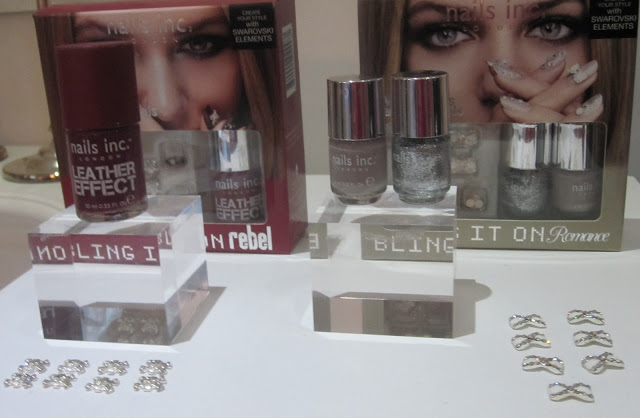 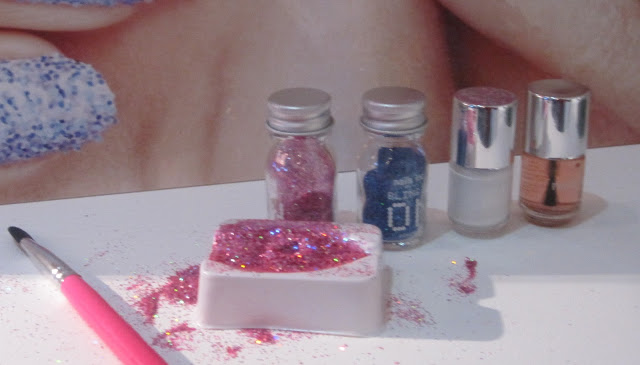 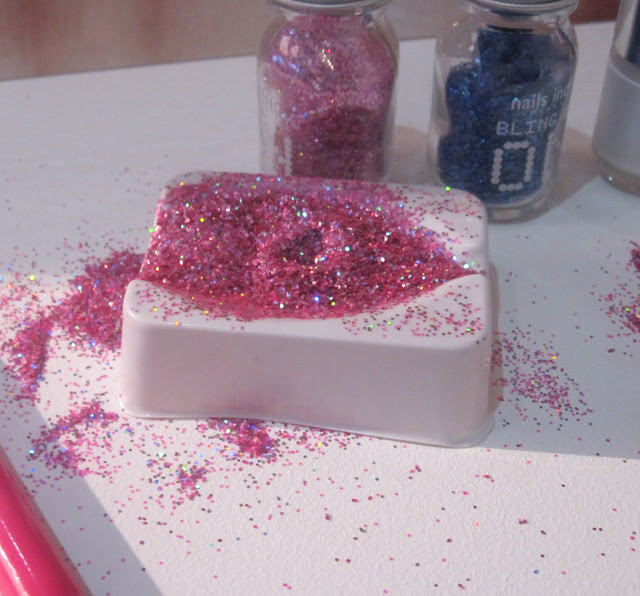 There are a couple of new additions to the line of Bling It On Kits including Rebel, which contains a Leather Effect varnish in Shoreditch Lane as well as a selection of studs and Swarovski crystals and Romance, which  focuses on bow and crystal embellishment and contains a mini of Porchester Square and Electric Avenue.  Both will be launching in March 2012 and will cost £25.  There’s also be a Neon kit that’ll contain a couple of neon shades of glitter (in pink and blue) plus a mini Floral Street varnish and a Kensington Caviar top coat.  This will launch just in time for summer in May 2013 and cost £20. 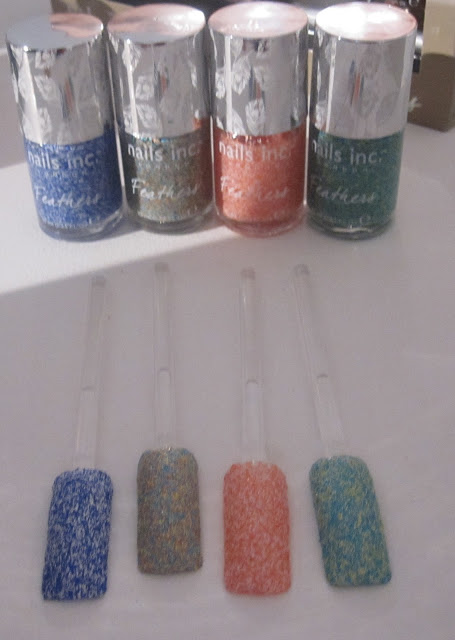 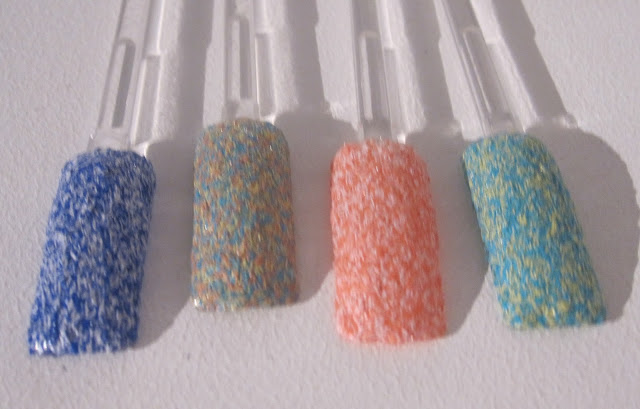 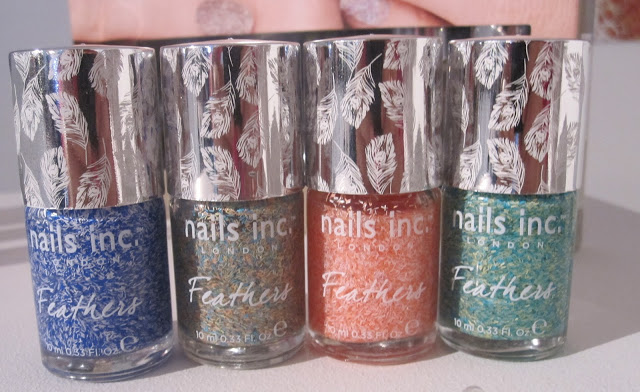 Do you see what I mean about there still being plenty more textural takes on nails? During my last visit to Nails Inc I thought they’d covered them all, but, as you can see, they’ve thought up plenty more!  These Feather polishes had bloggers all a’flutter (pun intended) and come in four shades: Edinburgh (pale blue and peach), Brighton (teal and yellow), Cornwall (blue and white) and York (peach and white).  One of the PRs had Cornwall on and it looked amazing, so I decided to get my manicure done using York for most of my nails, but having Brighton as an accent on each hand. I’ll upload pictures tomorrow as a NOTD.  The effect of these is very feather-like and incredibly textural.  My manicure was finished with a top coat, but I actually really liked the finish without the top coat as it allowed the texture to show through more.  These will be £11 each and launch in March 2013. 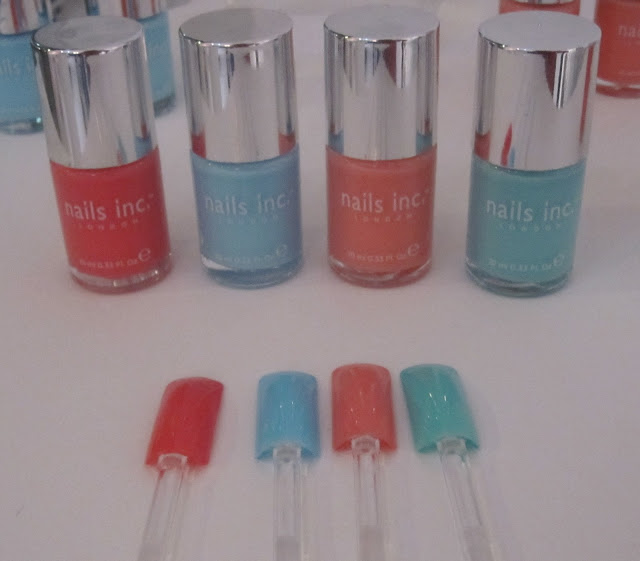 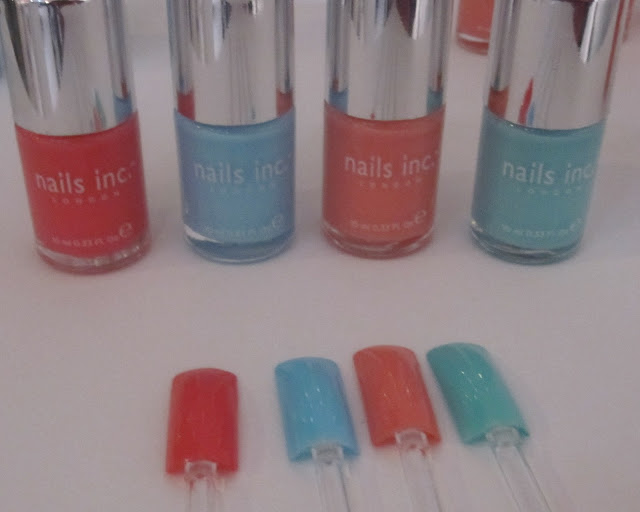 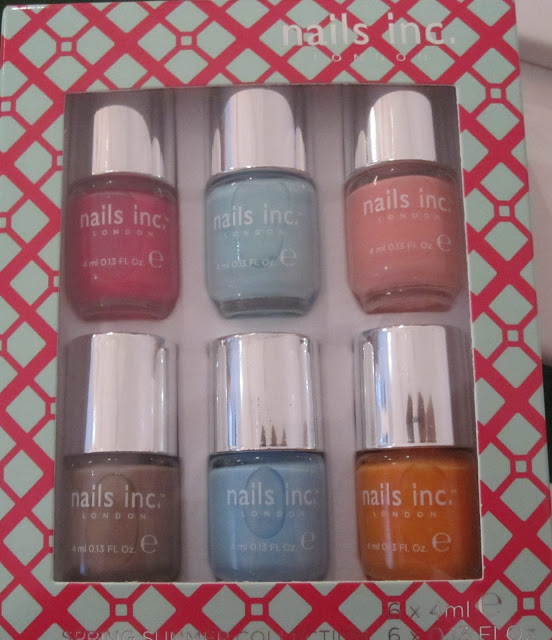 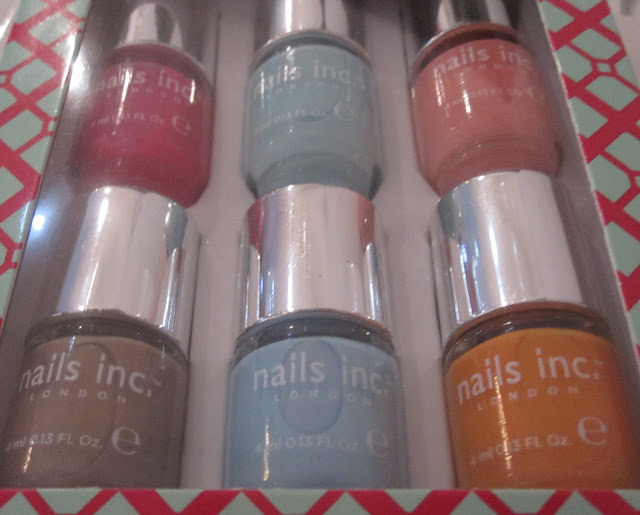 Now *these* are gorgeous!!  The SS13 shades are beautifully summery; bright, fun and I want them all.  There’s nothing textural here and instead the focus is on the colours themselves, which is fine by me as they really are little treasures.  The four shades are St James Park (coral/red), Royal Botanical Gardens (mint green), Chelsea Physic Garden (baby blue) and Kensington Palace Garden (peach).  I honestly can’t decide on a favourite and I went from Kensington Palace Gardens to Royal Botanical Gardens before deciding on Chelsea Physic Gardens as my favourite…but now I’m back to Kensington Palace Gardens again.  These arrive in March 2013 and will cost £11 each but there’s also a mini kit launching at the same time which will cost £22 and will include 3 of the shades mentioned above plus three more garden-themed shades. 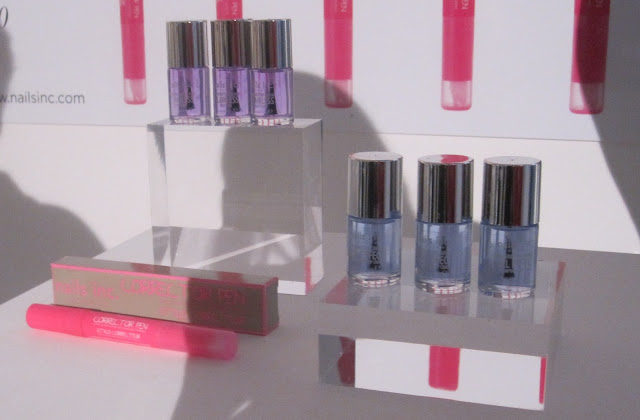 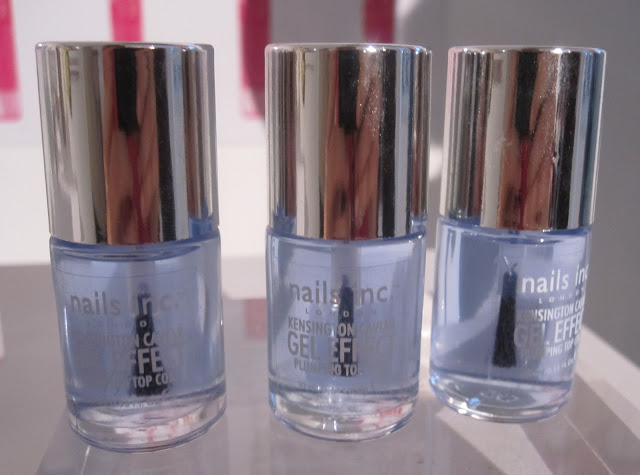 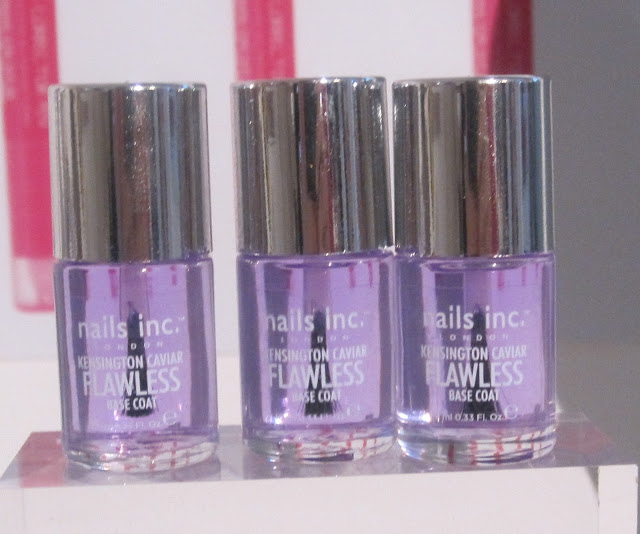 There’s a new base coat and top coat being added to the Kensington Caviar collection in January 2013 for £12 each.  The base coat promises a primer like base with a fast dry finish and the top coat is a Gel Effect, meaning that it’ll give that plumped-up, ultra-glossy finish you get with gel manicures but without the commitment.  There’s also a corrector pen available now for £10.

So that’s it (I think…) and there we have all the amazing new Nails Inc launches for SS13.  There are so many amazing things arriving and Nails Inc continue to revolutionise the nail art industry so I can’t wait to see what’s next.

Since I've been on my New Skin plan I've had to pass up a lot of review opportunities for new...