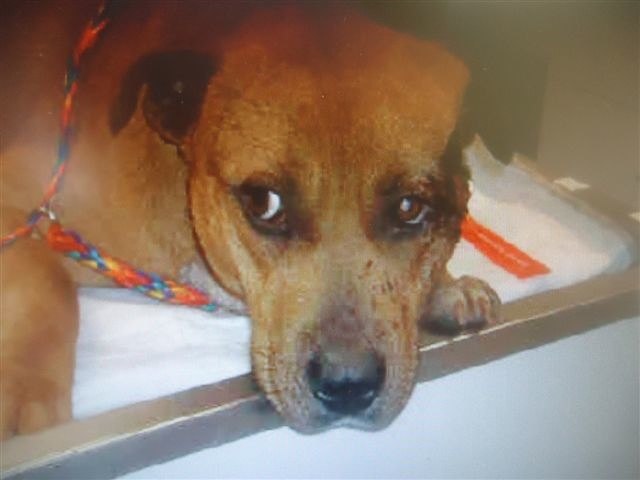 PIN ITSorry guys, this is a hugely off-topic post that is in no relation to beauty whatsoever (quite the opposite, sadly) but occasionally I’ll hear of animal-related stories that really get to me, so I’m hoping you won’t mind if I share this story with you in the hope that you might be able to help.  I do try and keep OT topics to a minimum, but I’m hoping you’ll read on and understand why I had to post Gunnar’s story.

Yesterday in America, a poor, innocent dog was viciously attacked by a man with a sword who had decided that he was too annoyed with dogs in his neighbourhood, and would take matters into his own hands.  He therefore went around his area with a sword, randomly stabbing dogs.  A few managed to escape with minor injuries (from what I can gather) but Gunnar wasn’t quick enough.

This man proceeded to stab and slice parts of Gunner in a brutal attempt to cut him into pieces whilst he was still alive.  He tried to cut off both ears and one leg.  Can you imagine that? I can’t get my head around the idea that any human being could do that to an animal whilst it cried in pain.  Gunnar was taken in by the animal charity, Noah’s Arks Rescue who are now doing everything they can to try and save his life and find him a new home.   To add insult to injury, when Gunnar’s owner realised what had happened, he didn’t take him to the vet and instead called Animal Control and asked them to take Gunnar away.

Noah’s Arks Rescue need $8460 to fund the extensive surgery and rehabilitation Gunnar will need.  I’ve donated $20 (roughly £14) and I’ve joyfully watched the funding amount dramatically increase over the past hour.  When I first became aware of Gunnar’s trauma, the donations stood at around $600 and at the time of writing it’s now $1955 which proves the awesome power of what spreading the word can do.  There have been a couple of large donations, but it appears that most people have donated just $20 which is cheaper than a Bobbi Brown lipstick (woo! Managed to get a beauty reference in there after all) and proves how quickly the funds could be raised if we all sent a few quid Gunnar’s way.

The main reason I’m writing this is to get the word out (so please share if you can; doesn’t need to be a link to this post, just a link to the donation page which I’ll add below) but also because I’m asking that if you have a spare few pounds (it doesn’t need to be $20 as every penny counts!) then please help out Gunnar if you can.  The donation process is easy and can be done through PayPal.

I’m going to include two links: the first link is to the main page where you can donate to Gunnar’s cause and get a bit of backstory, but the second link is to Gunnar’s page which includes a lot more information about what happened to Gunnar and some very explicit images.  PLEASE DO NOT go to the second link if you are someone who can’t handle seeing a heavily abused and bloodied animal.

Here’s the first link to the donation page.

I’m keeping a close eye on Gunnar’s progress.  I hope you don’t mind me taking advantage of your attention and thanks so much for reading.  If you can’t do anything else, then please just cross your fingers and send some hope and love to Gunnar.  I have everything crossed that Gunnar will get his happy ending by finding health again and moving in with a loving family for his forever home.  I’ll leave you with a quote taken from Noah’s Arks page xx

“No one could make a greater mistake than he who did nothing because he could only do a little.”

The Big Mother’s Day Post – Gifts for Every Budget

My mum's birthday is within a week of Mother's Day, making March a rather expensive month for me.  Thankfully my...