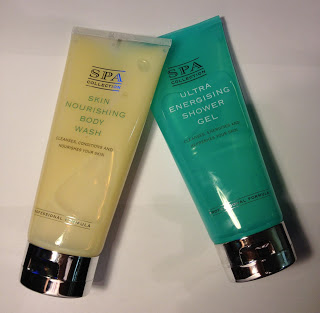 As mentioned here, Marks and Spencer recently made a few new additions to their Spa Collection and these included a few new body washes.  I’m currently using the Nourishing Body Wash and the boyfriend is using the Ultra Energising Shower Gel.

I’ll start with the Nourishing Body Wash.  For me, I need a body wash that is as moisturising as possible.  I don’t have particularly dry skin, but I like the idea of using a wash that can both cleanse my skin and moisturise it so that ideally I can avoid using a body cream altogether.

I’ve been using this body wash for several weeks and it’s definitely one I’ll be sticking with.  It has a gentle, cottony scent that doesn’t leave my skin heavily scented, it just smells clean which I personally prefer.  Most importantly, it’s really, really moisturising so I don’t need to apply a body cream after my shower.  It lathers beautifully and feels more like a creamy lather as opposed to a soapy lather, so I can imagine this would be great for those with dry skin.  At £5 for 200ml this punches well above it’s cost and is easily as effective at both cleansing and moisturising as much more expensive body washes.

Now on to the Ultra Energising Shower Gel.  I’m not really one for being energised in the shower as I don’t have a bath (yes, it’s gutting…) so I try to make my shower experiences as bath like as possible with various treatments, deep conditioners and indulgences.  However, my boyfriend is all about the wake-up shower so I thought he’d be best to test drive this shower gel.  It’s worth noting that my boyfriend is in no way metrosexual (alas) and so isn’t really one for making informed decisions regarding his personal hygiene habits.  However, he does seem to really like this shower gel and has almost finished it.  I’ve bought him several different shower gels over the past year and none have received such a positive reaction and this one seems to tick all the boxes for his simple male requirements; it smells good without being too girly and it leaves him clean.  He does smell lovely when he gets out of the shower, so I’m happy he’s a fan.  This isn’t a boys shower gel, it’s got a fresh fragrance that’ll work for both sexes, but I like the fact that Marks and Spencer have created a spa product that can be used by the boys as well as the girls.  Again, this one is a steal at £5 for 200ml.

I've heard so many amazing things about this foundation so I was really excited to try this.  I've only recently...