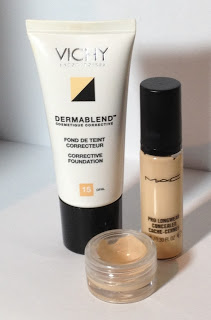 I recently reviewed Vichy’s Dermablend here, and mentioned it’s awesome concealing capabilities but complained of it’s limited shade range.  Another concealer that I really like is Mac’s Pro Longwear, but again I have issues with their shades as in all reality I’m an N17 as I’m neutral, plus 20 is too dark and 15 is too light.  I have Pro Longwear in NC15 which is slightly too pale and slightly too cool, which is almost the exact opposite issue to the Dermablend which is too dark and too orange.

So the obvious thing to do was to mix the pair together and create my own custom concealer! I kept mixing (in a sample pot with a cotton bud) and testing the mix on the side of my face in daylight until I had a perfect match.
I’m absolutely thrilled with my mix as it’s now a perfect colour that still covers brilliantly.  It also means that I’ll have a huge stock of concealer for a while as combined, the two concealers are just under 40ml.
I’m normally not a fan of faffing about with mixing stuff up, but I really didn’t want these two great concealers to go to waste so I’m really pleased I did.
Vichy Dermablend in the shade I have (Opal) is available here and Mac Pro Longwear is available here.

I've been meaning to review this for quite a while, but due to the fact that it isn't too cheap...