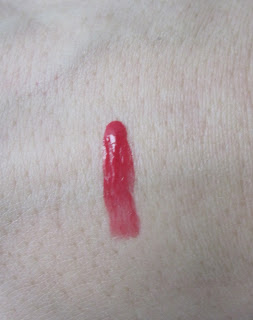 Maybelline appear to be on a mission to make all make-up long-lasting at the moment, as shortly after the arrival of their 24HR Colour Tattoo Eyeshadows (which I really do love – swatches can be found here and here) they launched a range of Superstay Tint Glosses in five shades, which are stains that allegedly last for ten hours. 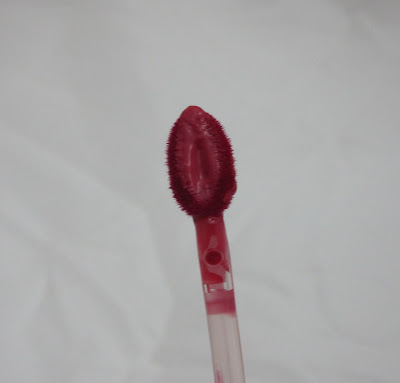 I purchased the Lasting Pink shade as I do love a bit of pink.  Lasting this may be, but pink it most definitely isn’t; I can’t actually find a hint of pink in this shade and therefore I’d definitely describe it as a strong and poppy red.  I still like it, although I don’t think it’s the most flattering red for me.

The texture of this is interesting, as during application it applies like a gel, whereas once it’s dry it feels like a tint.  It’s got great pigmentation and the colour payoff is truly impressive.  As I said, this particular shade of red isn’t too flattering on me; whilst I’m fairly neutral and therefore in theory should be able to wear most colours and shades, this is just a little bit too red and makes me look a tad pale.  Whilst this leans blue, I think it would suit people with a bit of warmth in their skin as it’s a lovely red, just not a red that suits me.

The doe-foot applicator is not the greatest, but not terrible either.  I did read on The Sunday Girl’s review of this that the shape of the brush head would make it really difficult for small/thin lipped people, such as myself, so I assumed this would make it a real challenge for me, but I think as long as you’re careful with the application then it’s pretty achievable.  What you can’t do with this is apply it quickly on a train or in the back of a cab, because it’s safe to say it’s likely to everywhere, which is not what you want to do with a long-lasting stain!

Longevity-wise, it’s pretty good.  I very much doubt it’d last anywhere near 10 hours (what is it with companies making insane claims about the time a product lasts? Just be honest and say 4 hours which is still good!) but I did put this through quite a few tests today including horrid weather of rain and wind, eating and drinking and whilst it didn’t stay bright and punchy the whole time, it was definitely still very much present after the 3 hours or so.

The one thing I do like about this tint is the way it fades.  A real issue I have with tints is how they fade patchily and you end up with a ring of bright colour around your lip line and virtually nothing left in the fleshiest part of the lips. This fades fairly evenly, meaning you still look as if you have an even wash of colour, albeit not as strong as it was on first application.  The colour still shows slightly brighter on the lip line, but it’s generally a lot more even.

So all in all, this gets a thumbs-up from me as it fades well, lasts fairly well, the colour payoff is good, the application isn’t too tricky and I’ll definitely be trying some other shades.

I’m putting together a FOTD post that includes this, so I’ll be posting that within the next few days.

Available at the usual haunts priced at £6.99.

....and on we go with my latest obsession; fake lashes.  I still most definitely have not got the hang of...