This years lead-up to Christmas has been incredibly busy and I’ve been lucky enough to attend launches for some great products in the past few weeks whilst attempting to get into the Christmas spirit.  It’s been 90% fabulous and 10% stressful having to run around London to see what’s new in the world of beauty, but I’ve met some lovely people, enjoyed some great presentations and discovered some wonderful products that I will be sharing with you soon.

Rather than flood my blog with lots of individual posts about the events, I thought I’d do one giant post so those of you who are interested can have a gander.  I’ve picked three pictures from each event and I’ll give a quick run down of the event itself.  Therefore expect a very picture heavy post!
Molton Brown 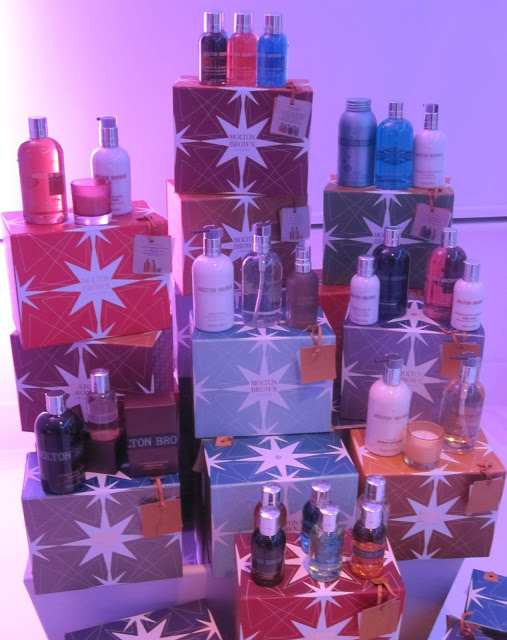 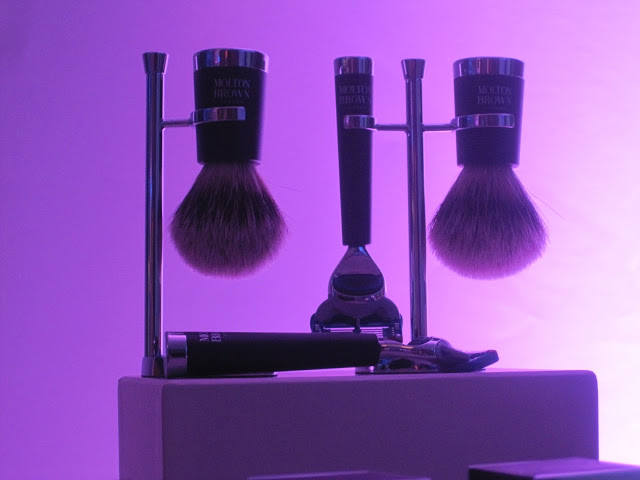 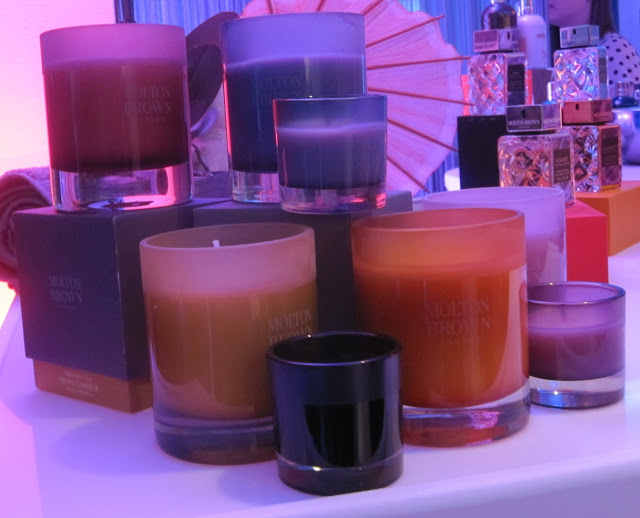 This was my first real experience of the Molton Brown brand and so far the two things I love most are the candles (the fragrances are just gorgeous) and the Coco de Mer Body Lotion which left my hands feeling like silk, as mentioned in my hand feature.  They have some seriously pretty gift sets, so if you’re in a last minute panic regarding what to get someone for Christmas then you really can’t go wrong with a little something from Molton Brown.  I’ve included a picture of the Shaving Kit as I thought it was so beautifully presented!
Avon 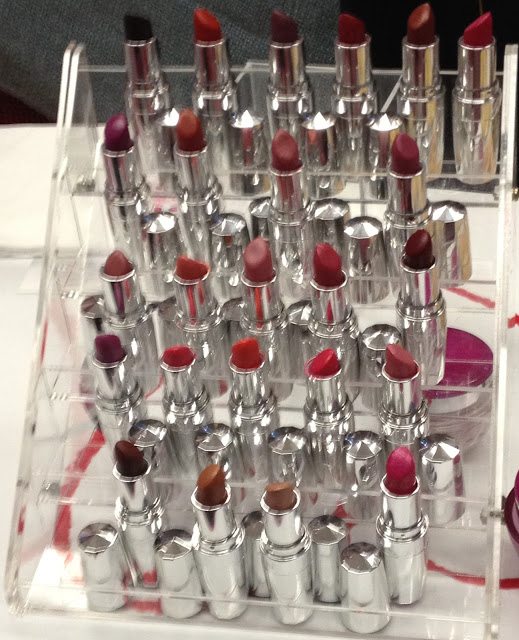 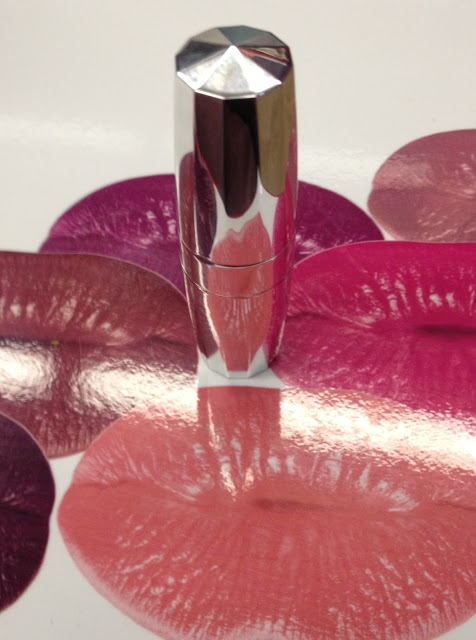 I got to hop aboard the Avon Bus which docked for a day in a quiet central London street and contained a beautiful display of all the upcoming launches from Avon including their new anti-ageing range, Anew Vitale, which is aimed to fill the gap in the market of anti-ageing products for those in the 25+ bracket and will launch in Janaury 2013.  I also got to meet the lovely Liz Pugh who colour matched me to one of the new Perfect Kiss Lipsticks which are kind of like Avon’s answer to Lip Butters; they’re creamy, moisturising formulas with a decent colour payoff and come in a mega 24 shades covering a good colour range, so there’s bound to be something for everyone.  These also launch next month for £8.50 and I’ll be reviewing some shortly.
Schwarzkopf 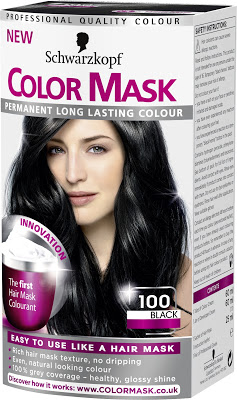 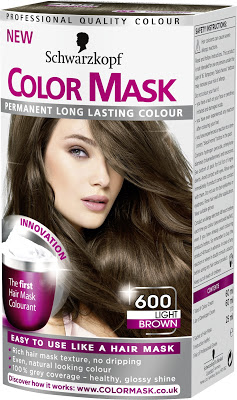 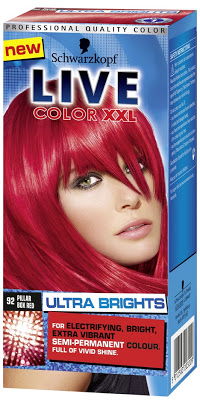 This was an event to celebrate the arrival of the UK’s first ever colour mask, created by Schwarzkopf.  There’s a good shade range available and the process of colouring is combined with a deep conditioning treatment which will result in both excellent condition and colour.  I believe these launch next month but I’ll need to double-check.  The range of dyes are permanent so I won’t be trying them out, but I will be adding some funky red streaks in the new year using their Live Colour XXL range so keep an eye out for that if you fancy seeing how I get on! It’s also a good time to note that there’ll be more shades being added to the XXL range including a pink which I’m really excited to try.
Pixi 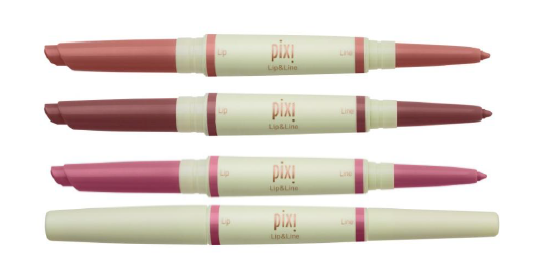 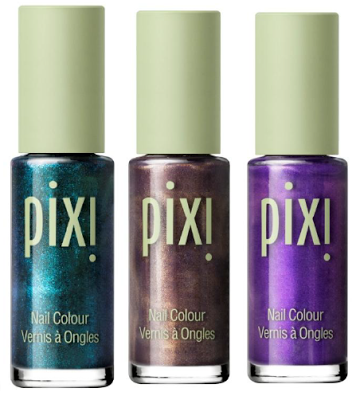 Next up is Pixi who released some lovely new products for the AW12 season, including the Early Bird Palette which has become a staple in my make-up routine due to it’s easy and wearable shade collection.  Check out my full review here.  I took pictures at the event, but for some reason when I tried to download them they were corrupted (whatever that may mean) so I’ve included some press shots of my picks from the AW12 range.
Elemis 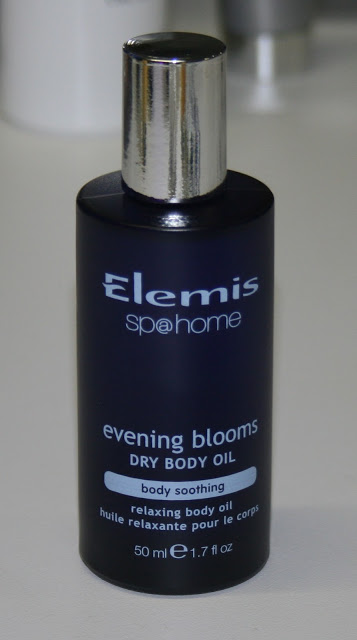 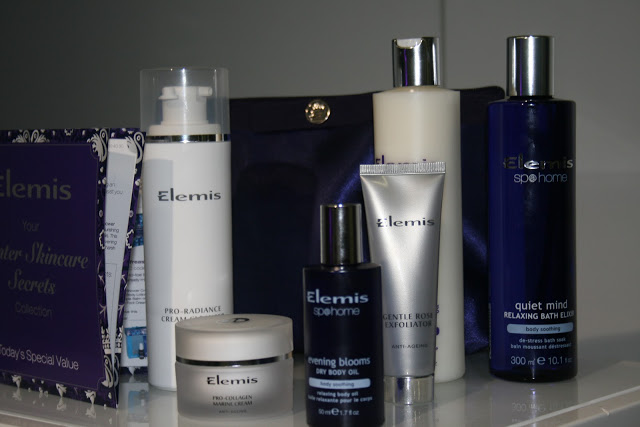 Slight cheat here as I’m including a few more pictures for this event, but that’s mainly because there’s a lot that I want to share and I couldn’t narrow it down to three pictures. 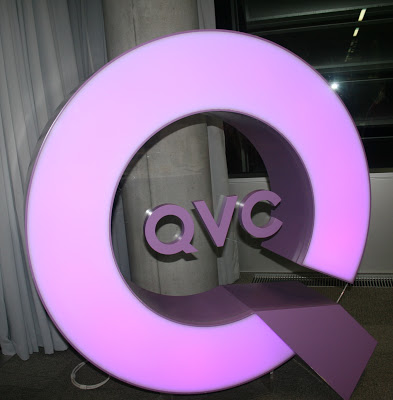 The Elemis event was great fun as it was held at the QVC studios to mark the arrival of the Elemis TSV.
Therefore, we got to have a good nose around the studios and were even allowed to watch the show go out live; which could’ve ended quite disastrously as I almost tripped on a cable as I walked into the studio…there’s five minutes of fame nobody particularly wants!
I also had a mini scalp and head massage with an Elemis therapist and got to sit in THE CHAIR.  THE CHAIR needs to be capitalised as it is a chair like no other; the whole thing moves so you’re literally being massaged from head to toe and I would quite like to live on one.
The Winter Skincare Secrets Collection is still available at a very reasonable price of £49.92 here.
Paul & Joe 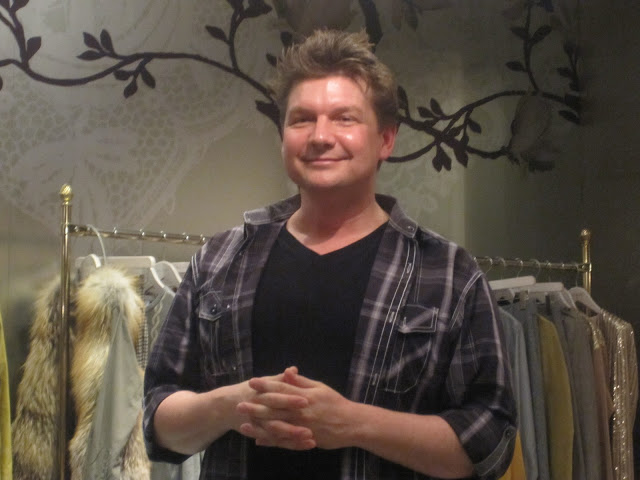 Paul & Joe events will always have a special place in my heart due to the lovely Craig-Ryan French; he’s the main make-up man behind the brand and he’s just so wonderful to talk to and is one of those people who sees the beauty in everyone.  Sounds gushy but it’s true! He gave up a run through of Paul & Joe’s lipstick formulas whilst giving us a masterclass in lipstick application techniques.  There’s too much to go through here, but I’ll be doing a berry lips feature soon so I’ll run through more of it then.
Sisley 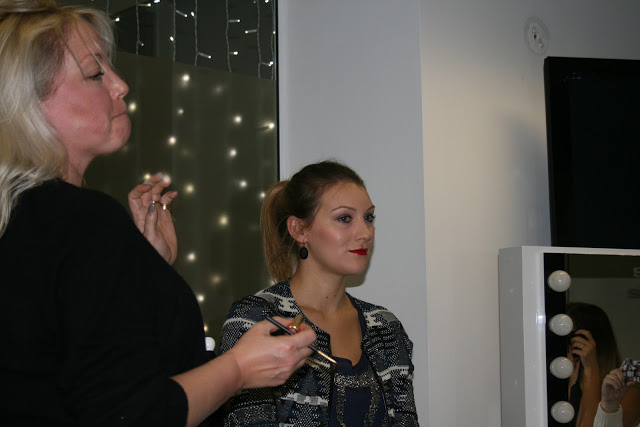 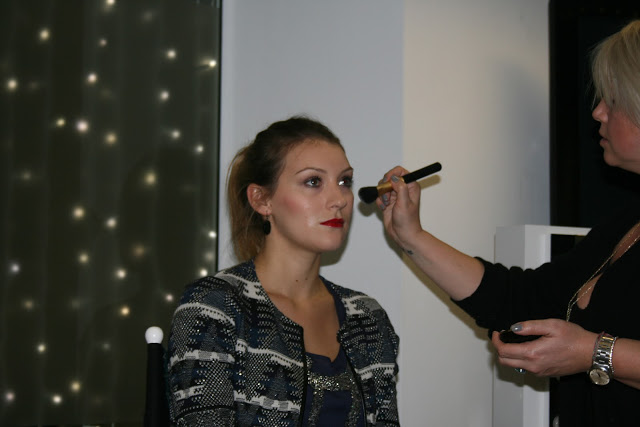 Sisley are renowned for their top-notch skincare, but are less known for their make-up, so it was great to have a chance to play around with some of the brands key make-up pieces and witness the creation of the perfect red lip make-up look, courtesy of Emma White Turle.  If you haven’t investigated the Sisley make-up range then I *strongly* recommend you do, as not only are the formulas brilliantly considered (most of the make-up items are chock full of skin-loving ingredients) but the range itself covers some beautiful shades too.  I’ve got a few items to play around with and I’ll be doing a Sisley FOTD soon.  If you don’t know where to start, I’d recommend checking out the Phyto-Kohl Star (a creamy, sparkly liner) or the Phyto-Lip Gloss.
Remington
Remington are releasing some absolutely amazing styling tools this season that I’m very excited about! The event was held at Lucy in Disguise, which in all honesty was completely lost on me as I’m about as fashionable as fruit cake, however, I did get to see the upcoming styling tools including the Stylist Easy Curl which I used last week and it is incredibly easy to use – something I don’t think I’ve ever said about a curling wand! My other pick is the Wet 2 Straight Straightener which allows you to straighten hair when wet.  I’ll be reviewing this soon too so if you’re interested in hearing my thoughts then keep an eye out for that.  There’s also a new range of Keratin Therapy tools which work to impress Keratin in your hair whilst you style, thus minimising the damage.  I love the idea of this as I have started dabbling with styling tools a lot more regularly recently and one of my main concerns is the damage that will inevitably result.
Eleven Hair
Speaking of curly hair, eagle-eyed readers may remember that I visited Eleven Hair a while ago to experience the Digital Perm, so I was excited to visit the salon again for a hair demo focusing on new season styles.  We were given step-by-steps on a few key hair looks, but my favourites were the various bun styles. We were shown how to create our own doughnut for a messy bun look (pretty simply, you take a sock, cut off the toes and roll it into a bun shape and this creates a soft platform to roll your hair around) and we also witnessed the creation of a neat bun using a more official doughnut; I actually thought you were supposed to hold it against the hair and roll/pin hair around it, but you’re actually supposed to roll the entire length upwards as you roll the doughnut towards the head, which makes much more sense but for some reason had never occurred to me!
Boots 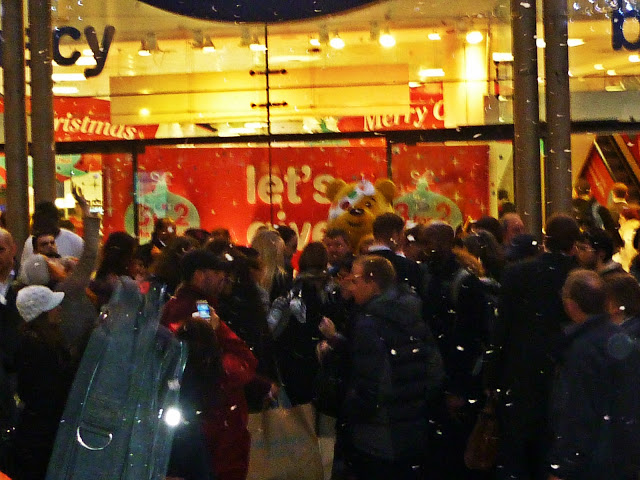 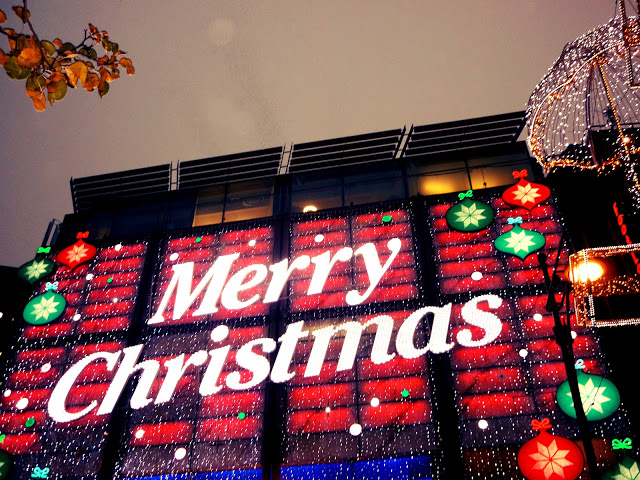 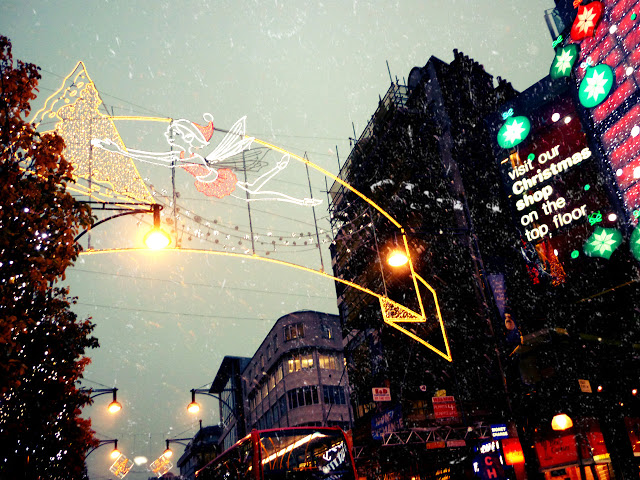 I made a quick informal visit to the Boots Flagship store on Oxford Street (as a side note, did you know there are three Boots stores on Oxford Street? I started at the furtherest one away so I ended up doing an inadvertent Boots tour…) as every day after 4pm, the store creates a mini snow fall outside it’s store to mark the winter holidays.  Sadly, the day I arrived they were having technical difficulties, but to give you an idea I’ve included some press shots.  It’ll be snowing every day until Christmas so if you fancy finding out what it’d be like to have snowy Christmas in London then you know where to go!
Benefit 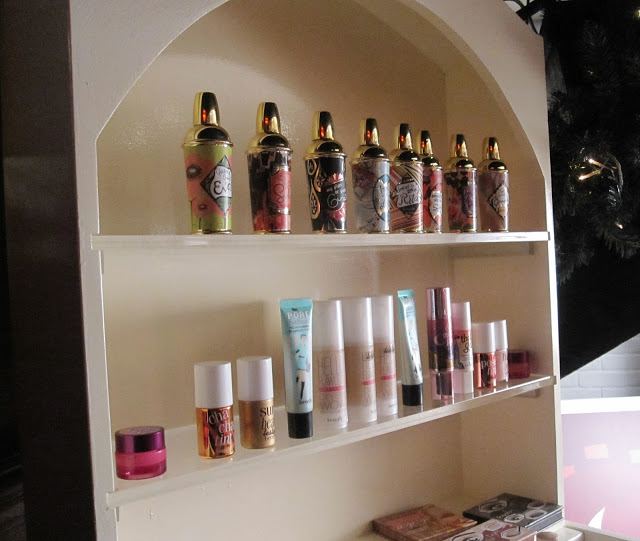 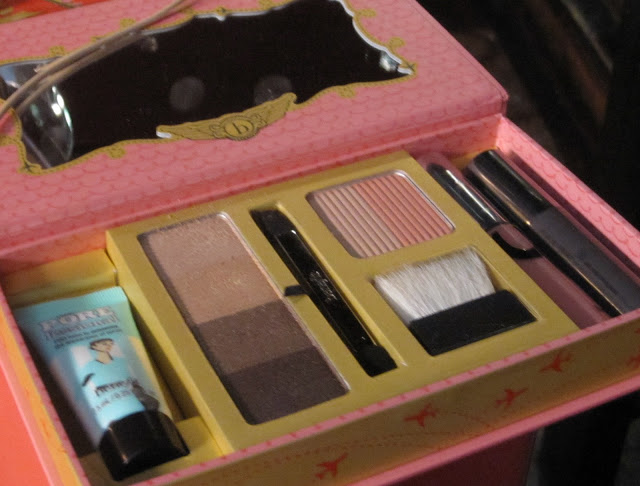 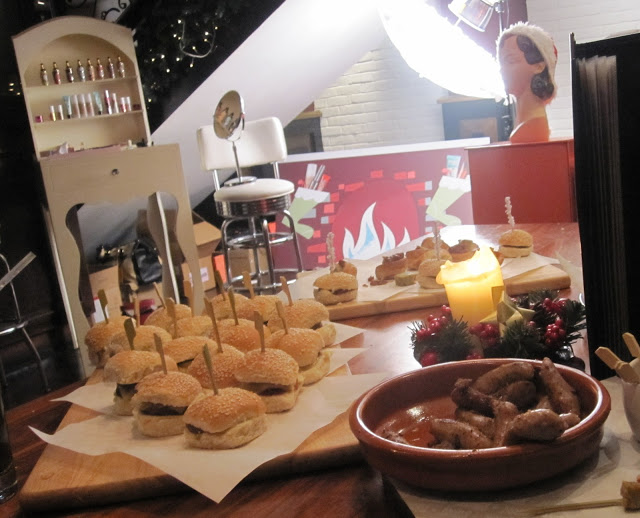 Last, but by no means least, we have the Benefit Christmas party.  This was my last event of the season so it was a bit of a wind-down for me, and I got to have a good old chin-wag with Grace from All That Slap and Catherine from Perfectly Polished whilst feasting on what can only be described as the world’s best sausages, along with mini Yorkshire puddings and hamburgers; it was a real treat! I also got to have a good look at Benefit’s Christmas gifts (such as the ones mentioned in my gift guide here) and I have the High Flying Gloss set to review for you soon.  You really can’t beat Benefit for gift sets thanks to their incredibly cute packaging and well thought out contents, and this year you don’t need to break the bank since I spotted this lovely little gift kit for £9.50 which includes minis of POREfessional, It’s Potent! Eye Cream and Triple Performing Facial Emulsion.
So that took almost as much energy to write-up as it did to attend the events! All-in-all it has been a lovely season of events and new product launches that have been exciting to attend and have certainly given me a much more interesting holiday season than I’m used to! I’ll be reviewing various products from the aforementioned launches soon.

Grumpy Cat knows what I'm talking about.  Christmas Affective Disorder; not technically 'a thing' (that I know of) but more...