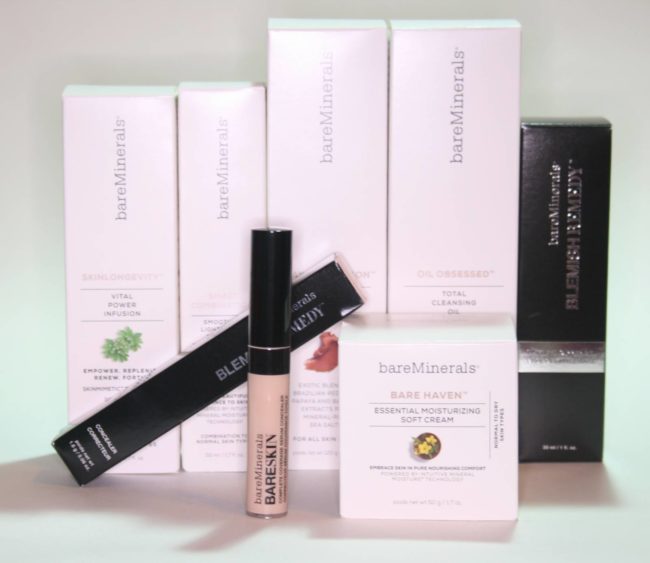 It’s all been a bit quiet from bareMinerals this year, then all of a sudden, they’re releasing everything! We have primers, concealers, mascaras, liners, and probably most importantly, there’s a whole new skincare range to get very, very excited about.  Consequently, expect some bareMinerals spam over the coming weeks as I’ve got a few bits to try out that I’ll share my thoughts with soon.  In the meantime, let’s have a little look at some of the newest base launches: 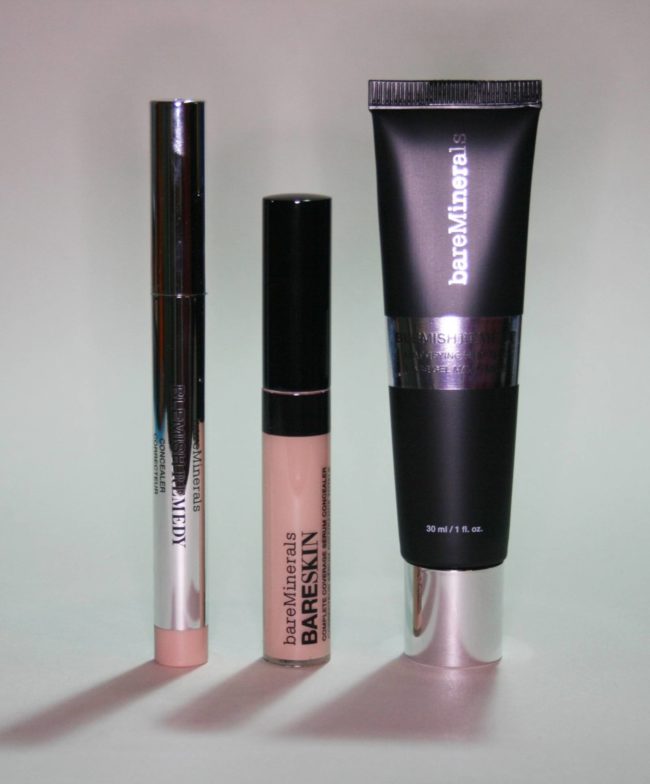 bareMinerals do some fab concealers so I couldn’t wait to get my hands on the two newest ones joining the range.  The first concealer is the bareSkin Complete Coverage Serum Concealer, which comes with a doe-foot applicator and comes in six shades.  It’s a multi-tasking concealer that’s thin enough in texture to work well on both the under eyes and on blemishes whilst blending easily.  It’s £22 and I hope they extend the shade range soon! The second concealer is the first of the two new Blemish Remedy products, which is the Blemish Remedy Concealer. This is a pen-style concealer that contains peptides, tea tree oil and Aspen Bark, so it’s designed to treat spots whilst hiding them.  The shade range is limited to four, which is a bit of a shame since it’ll exclude quite a lot of people, but if you can find a shade match then it’s £22 well spent. The final Blemish Remedy product is the Blemish Remedy Mattifying Prep Gel, which is another treatment/makeup hybrid containing similar goodies to those featured in the matching concealer.  This is designed to leave skin looking and feeling matte and fresh thanks to oil-absorbing minerals, and it’s also £22. Now onto the skincare, of which there is quite a bit! There’s literally an entire new range launching with a three step process: Purify (cleanse), Empower (serum) and Moisturise (er…moisturise).  There are four new cleansing products – one oil and three cleansers – one new serum and four new moisturisers, meaning you should be able to find a range most suited to your skin type.  I’ll start with the serum, which is the product that’s designed to slot into all the routines, regardless of your skin type; it’s called Skinlongevity Vital Power Infusion, and it’s lead ingredient is Long Life Herb, which is a plant found in Okinawa that’s mineral and vitamin rich and features heavily in the diet of Okinawa locals.  Consequently, the smarty-pants behind bareMinerals decided to test it out in skincare and found that it provides a whole host of skincare joy such as boosting radiance and vitality whilst hydrating and evening skin tone.  Most importantly (for me) it’s also non-comedogenic, so it really is designed to give all complexions a boost.  It’ll be £45 when it launches. I think my favourite skincare item is a cleanser as I really do love them, so you can imagine how excited I was when I realised that they were launching four new ones for me to lust over.  The first is the Oil Obsessed Total Cleansing Oil (£22), which is an oil made-up of Bilberry Oil, Borage Oil, Cucumber Oil, Sunfower Oil and Mineral-Rich Sea Salts that is suitable for all skin types.   Next is the Pure Plush Gentle Deep Cleansing Foam (£18), which sounds pretty gentle and contains Elderflower Extract and Rosemary Extract alongside the mineral-rich salts, but I’m not a mega fan of cleansing foams so I’ll give this one a bit of a wide berth.  Having said that, if you’re a die-hard foam fan then I’m guessing this one will be right up your street.  Extending the Blemish Remedy range further is the first of the two products joining the range, the Blemish Ready Anti-Imperfection Treatment Gelée Cleanser (£17), which is an oil-free gelée that’s designed to dissolve impurities and is the only one that is marketed at a particular skin type (problematic) rather than suited to all skin types.  The final cleanser is the one that I think will cause the biggest stir, which is the Clay Chameleon Transforming Purifying Cleanser (£18).  This one contains Brazilian Red Clay, papaya and bamboo alongside the salts, and it’s designed to gently detoxify skin and draw out impurities. The moisturisers really do cover every formula preference, going from an oil-free gel in the True Oasis Oil-Free Replenishing Gel Cream, right through to a rich butter in the Butter Drench Restorative Rich Cream.  Starting with the True Oasis Oil-Free Replenishing Gel Cream (£29), which is suited to oily to combination skin types and contains Algae extract alongside Intuitive Mineral Moisture Technology, the latter of which is featured in all the moisturisers.  The Smart Combination Smoothing Lightweight Emulsion (£30) is suited to  combination to normal skin types and contains St John’s Wort extract.  It’s also oil free, but gives a little more hydration than the gel-like formula found in True Oasis.  Bare Haven Essential Moisturising Soft Cream (£30) is probably the one that’ll suit the most skin types, as this one is aimed at normal to dry skin; it contains oil but it’s a lightweight formula so if you prefer your hydrators with oil but don’t want anything too heavy, this one is probably a safe bet. The final product is the one I’m avoiding as I would imagine it’ll be a bit too rich for my skin type, which is the Butter Drench Restorative Rich Cream (£32) – I do love the name Butter Drench though! This is a butter cream rich in shea butter and aimed at dry to very dry skin types.

Other than the base products at the top, everything else mentioned is due to launch in June 2016.  However, QVC appear to have the early scoop as there are a few of the skincare launches already on the site (here’s the QVC bareMinerals skincare section), with some great bargains and sets available too – I have a great set to show you which I’ll be posting about very soon!

Next month sees the arrival of new-to-the-UK beauty brand, Fusion Beauty, who will launching exclusively into Space NK.  2016 is...