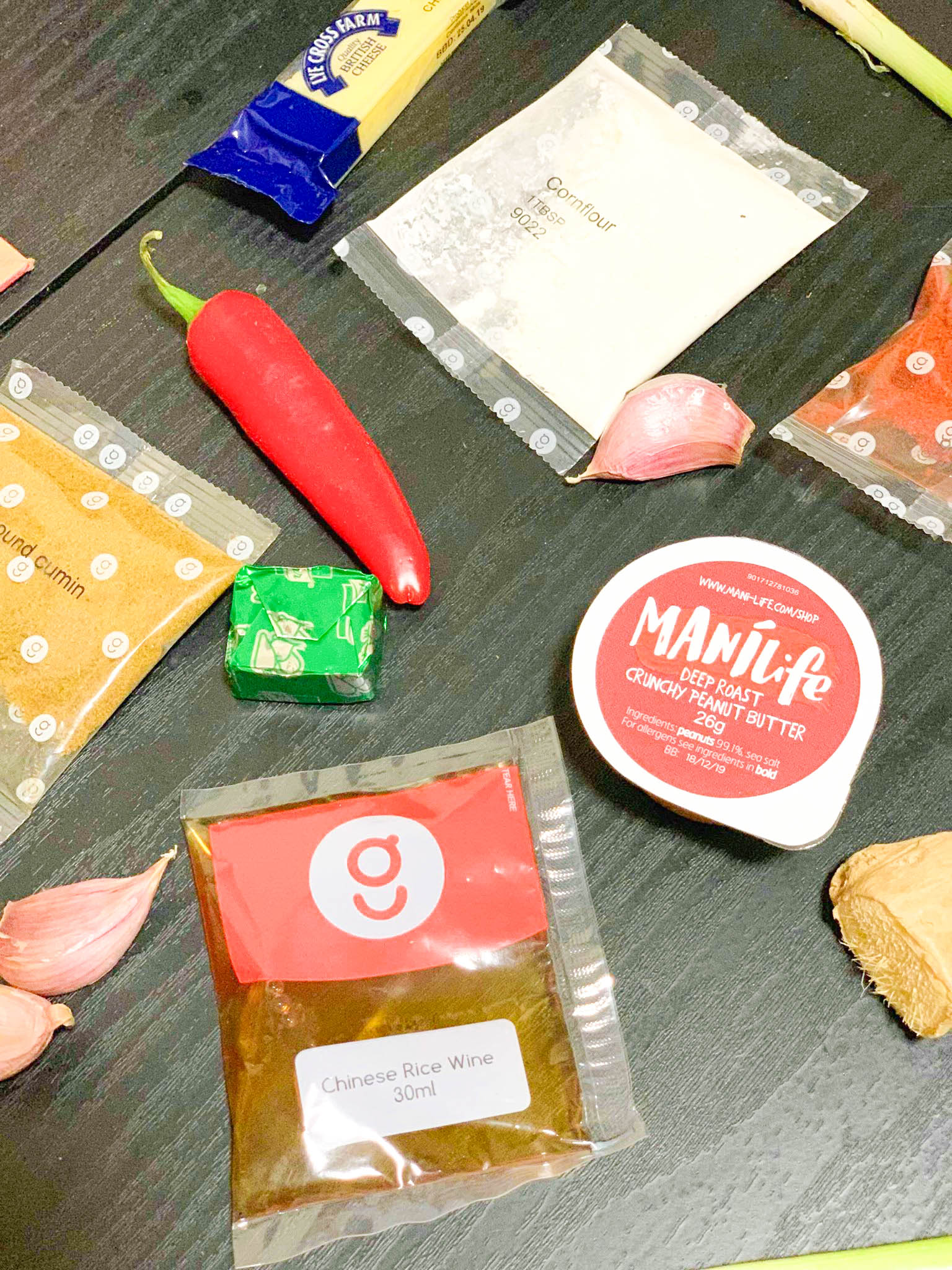 I decided in January to make a really conscious effort to try and eat more plant-based (following a Flexitarian approach, as my son and I still need our Saturday night McDonalds…) as I have done a lot of research which suggests that a plant-based diet is a generally much healthier approach to optimum nutrition.  With that in mind, I decided to look into recipe boxes with the hope that they would introduce me to more vegan/plant-based recipe ideas, since I really didn’t know where to start.  The two most dominant recipe boxes that appeared in my searches were HelloFresh and Gousto.  I considered HelloFresh, but I didn’t feel that they offered enough of the sort of meals Teddy and I liked, so I went with Gousto, especially as they had a really good deal on (still do – more info later) to give me an opportunity to fully try the meal service. 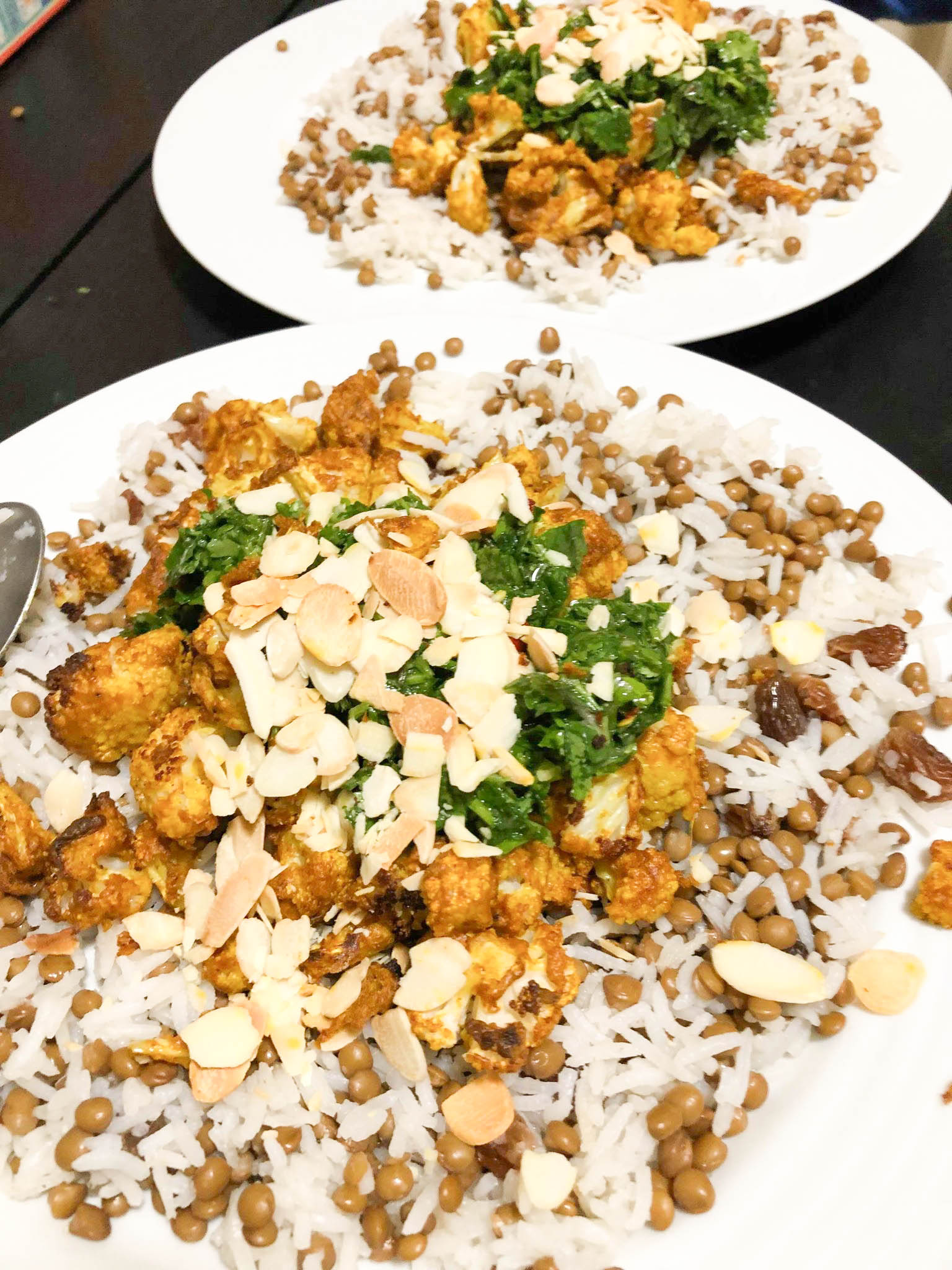 The process starts with you selecting what meals you would like delivered.  You can do this either online or via the app, and the meal choices are incredible.  They’re all broken down into various categories such as different meats, healthy choices, quick meals and of course the free-from lines, which include dairy-free, vegetarian, gluten-free and plant-based.  You then decide how many meals you would like – up to four a week – and how many people you are cooking for – 2 or 4 people. The latter element is a bit controversial as there are so many families of three (parents and one child, for example) but the 2 people version works for me and Teddy.

Once you have selected your meals (the more you go for, the cheaper the “per meal” price) you then pick the day you want the food delivered and place your order.  The food is delivered by courier which you can keep an eye on with updates, plus if you’re not around you can leave instructions on where to leave the box.  I believe there is a chargeable option to narrow down the delivery time, if you’d prefer not to have the box left in the safe place.  I did have an issue with the courier locating my property (and leaving the box at a completely different address in a different street!) but it was a one-off and Gousto were very quick at getting it sorted – I’ve had a couple of dealings with their Customer Service team and it’s generally been very good. 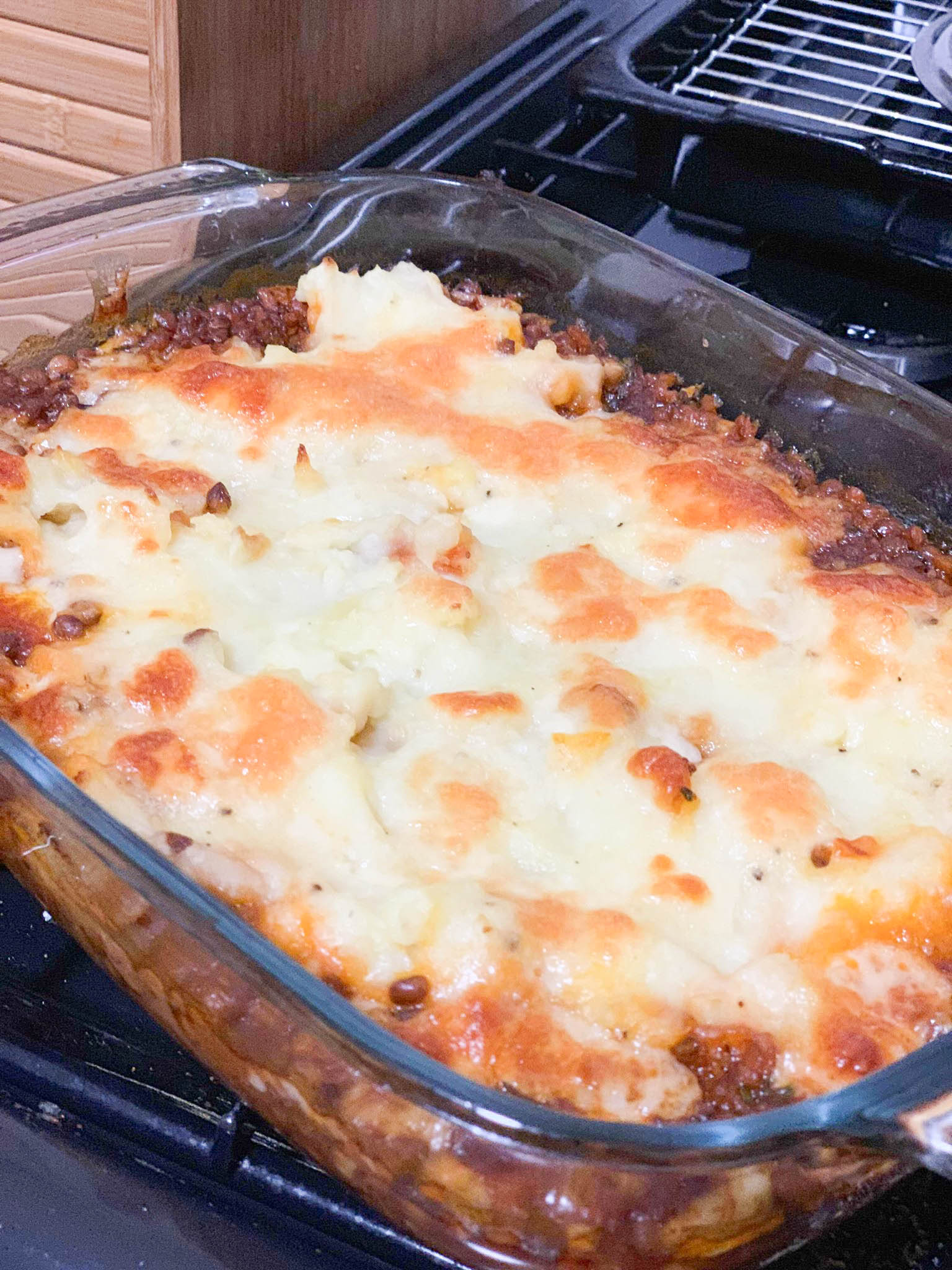 Once you have the box, you’re presented with an array of ingredients that will allow you to make your meals.  I always order three meals a week so I usually have a few things that need to go into the fridge (which is kept in a disposable ice wrap to keep things fresh – just in case you’re not around to take in the box straight away) as well as the additional pantry ingredients, alongside a host of various spices, herbs and flavour-enhancers.  These all arrive in ready-measured quantities, so all you have to do is cook the food.

My first box arrived with an added extra of a Gousto wooden spoon and my second box came with a folder to store all my recipes.  I have to say, I love both of these as my spoon I use for all my Gousto recipes and I LOVE having a folder packed full of recipes, knowing that I’ve cooked each and every one.  Even though I joined Gousto with the intention of learning more plant-based recipes, I would say it has drastically improved my general cooking and really opened my eyes to how flavour doesn’t need to be complicated if you select the right combinations. 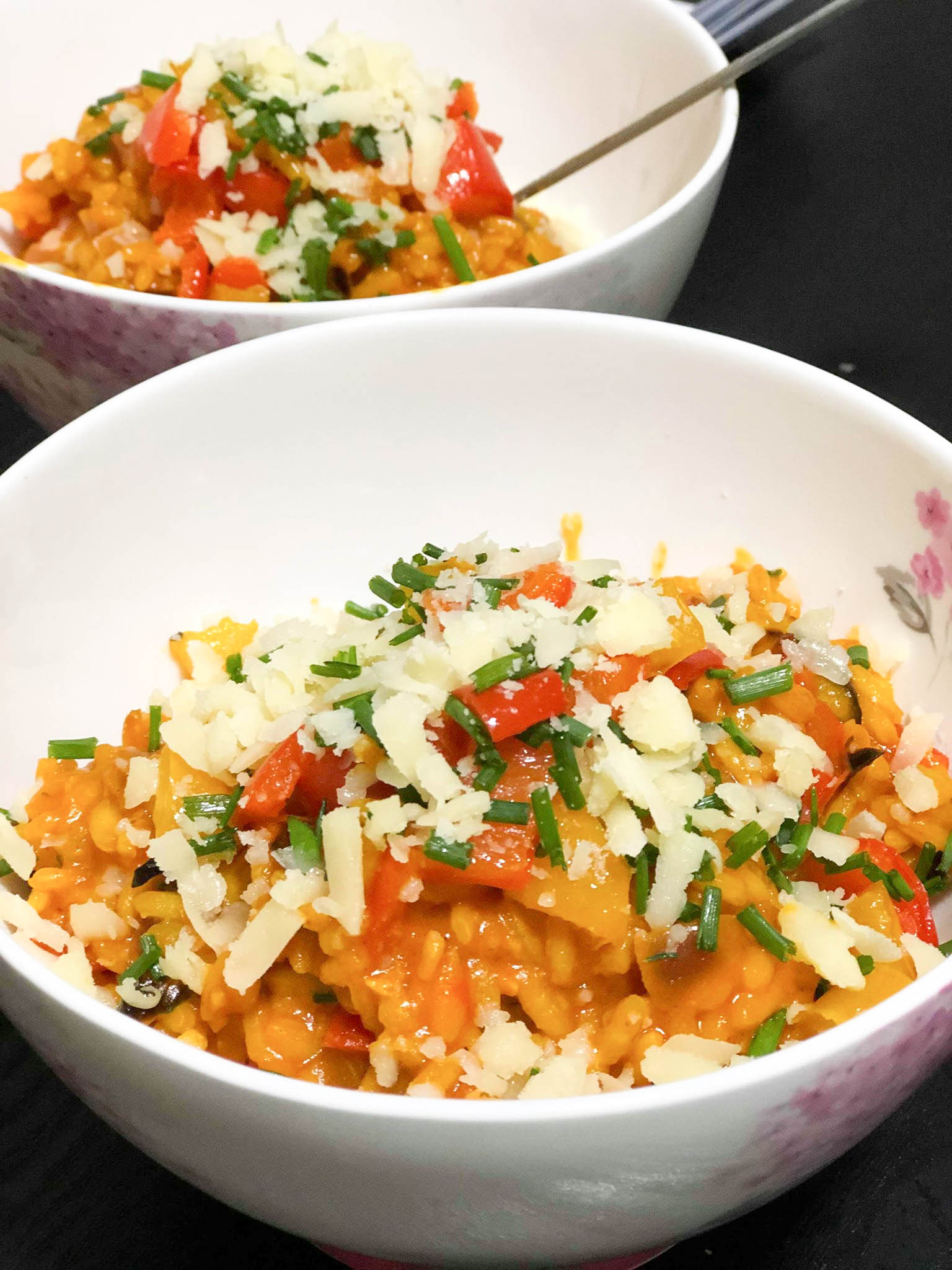 The first meal I made was the Sweet Mixed Pepper & Chive Risotto.  As you can probably see, it wasn’t plant-based as the recipe called for cheese and we decided to indulge, but it would be very easy to have made it plant-based by removing the cheese.  The recipe was a good start for me, which allowed me to familiarise myself with the process. 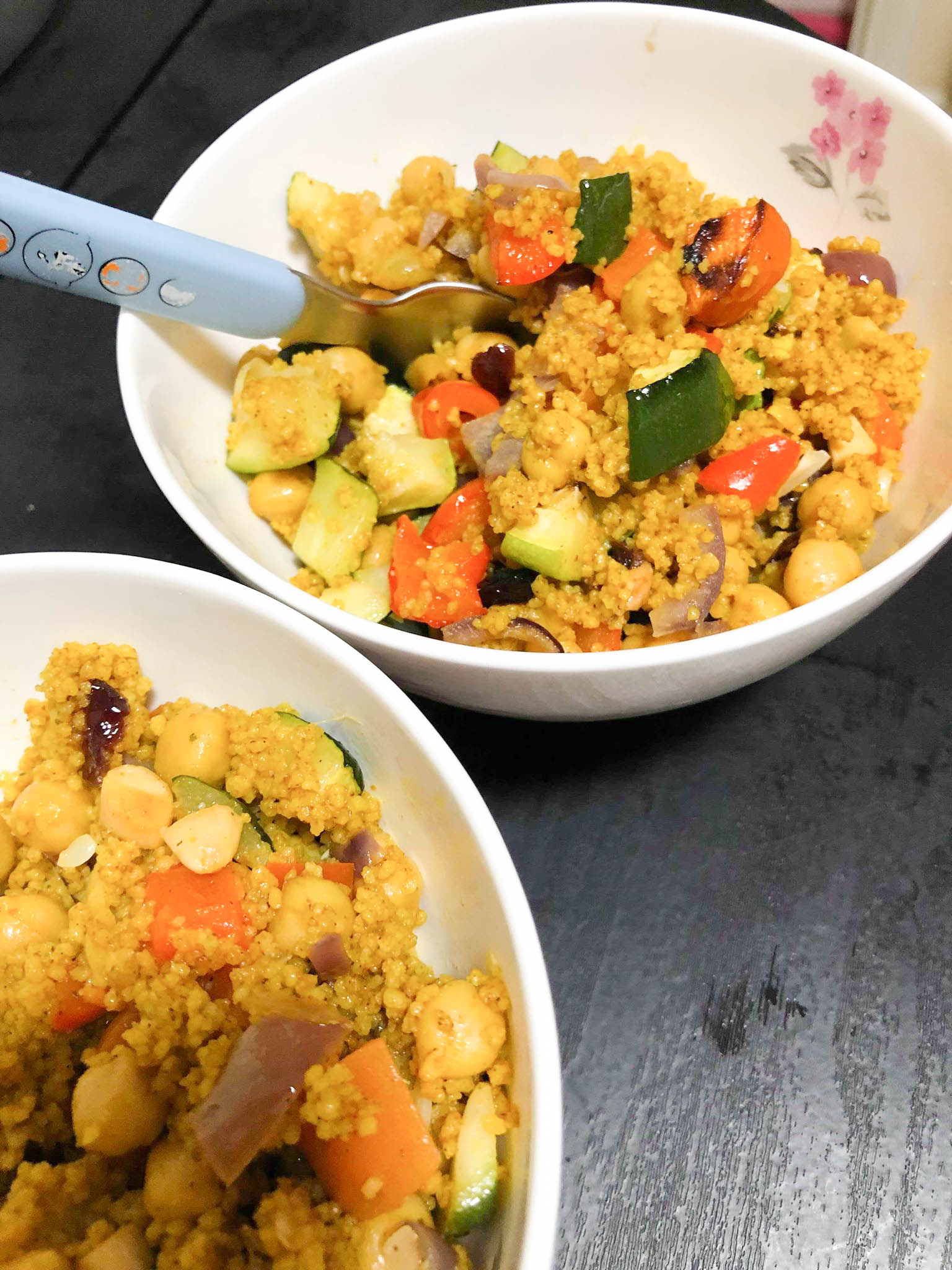 The next meal was the Chunky Roasted Vegetables with Jewelled Couscous and this was a real game-changer for me, as it’s not really the sort of thing I would normally go for, but my word it was flavourful – the couscous alone was so tasty (you know when you can still taste something when you think about it because it left such an impression? I cooked this months ago but I can still taste the couscous!), the whole meal was easy to prepare and the portions were generous enough so there was enough for me to have for lunch tomorrow – another point that’s worthy of note as the portions are big, so really you do get 2 massive meals, or 3 smaller ones. 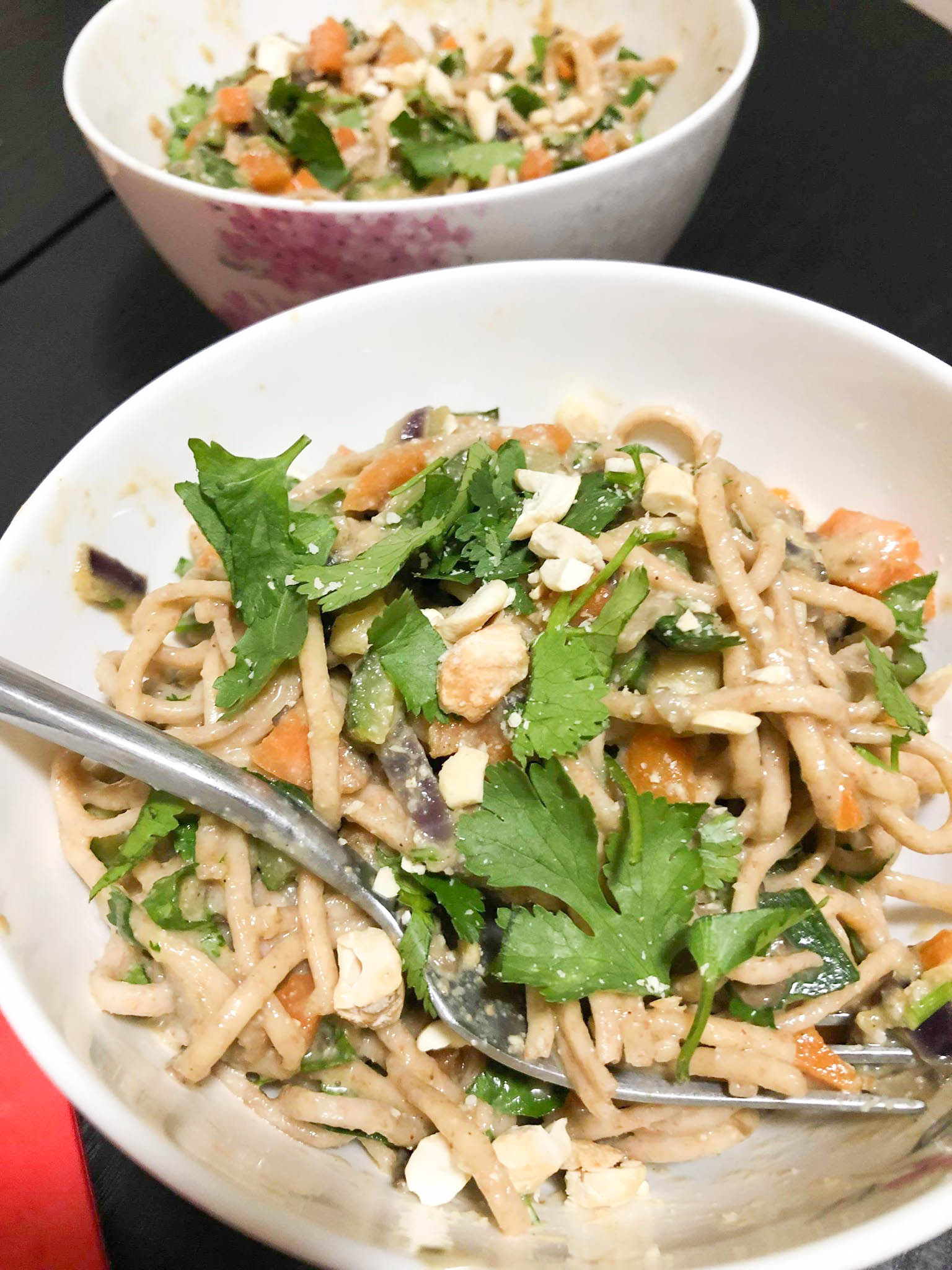 The Vegetable Noodles & Silky Cashew Nut Sauce was a great example of the sort of recipe you might hear about and think there’s no chance you could make yourself, but this turned out amazing (I can’t believe how easy and tasty the cashew sauce was!) and Teddy loved it too, so it was a winner all round and you would never think of it as a completely plant-based meal, even though, of course it was. 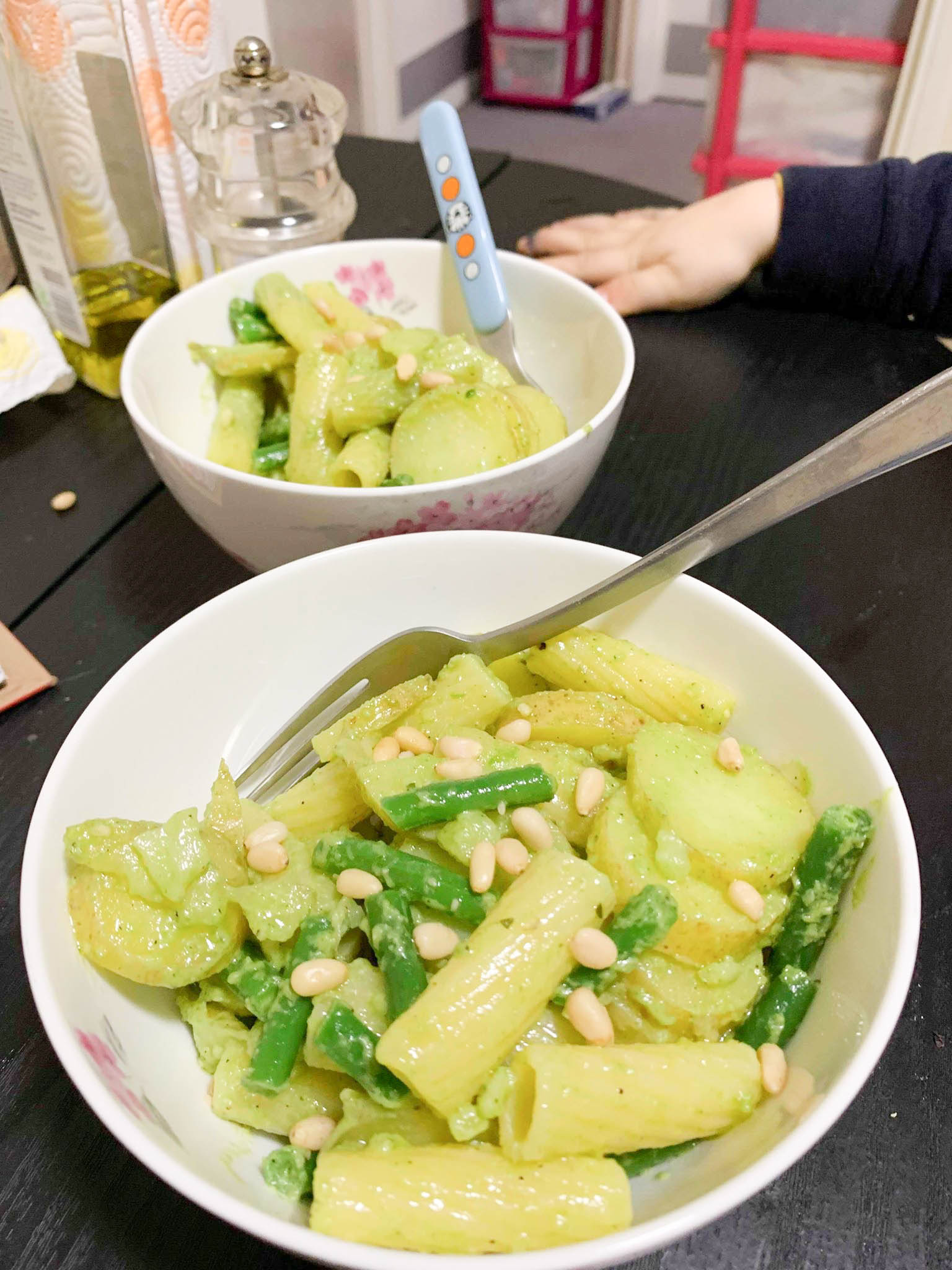 Speaking of Teddy’s favourites, the biggest surprise was the Pasta Alla Genovese; this was the recipe I prepared with one hand hovering over the “order pizza” button on my phone, as I was not expecting much at all.  The ingredients were very simple (potato, pasta and beans cooked in stock, basic pesto sauce blend) and when I made the sauce, it smelled and looked horrible! Then we ate it, and I would say it was up there in my top 5 and Teddy said it was his favourite and he keeps asking for it.  It was probably the most simple recipe we made, but again, it’s a case of having some very specific ingredients come together to create amazing taste. 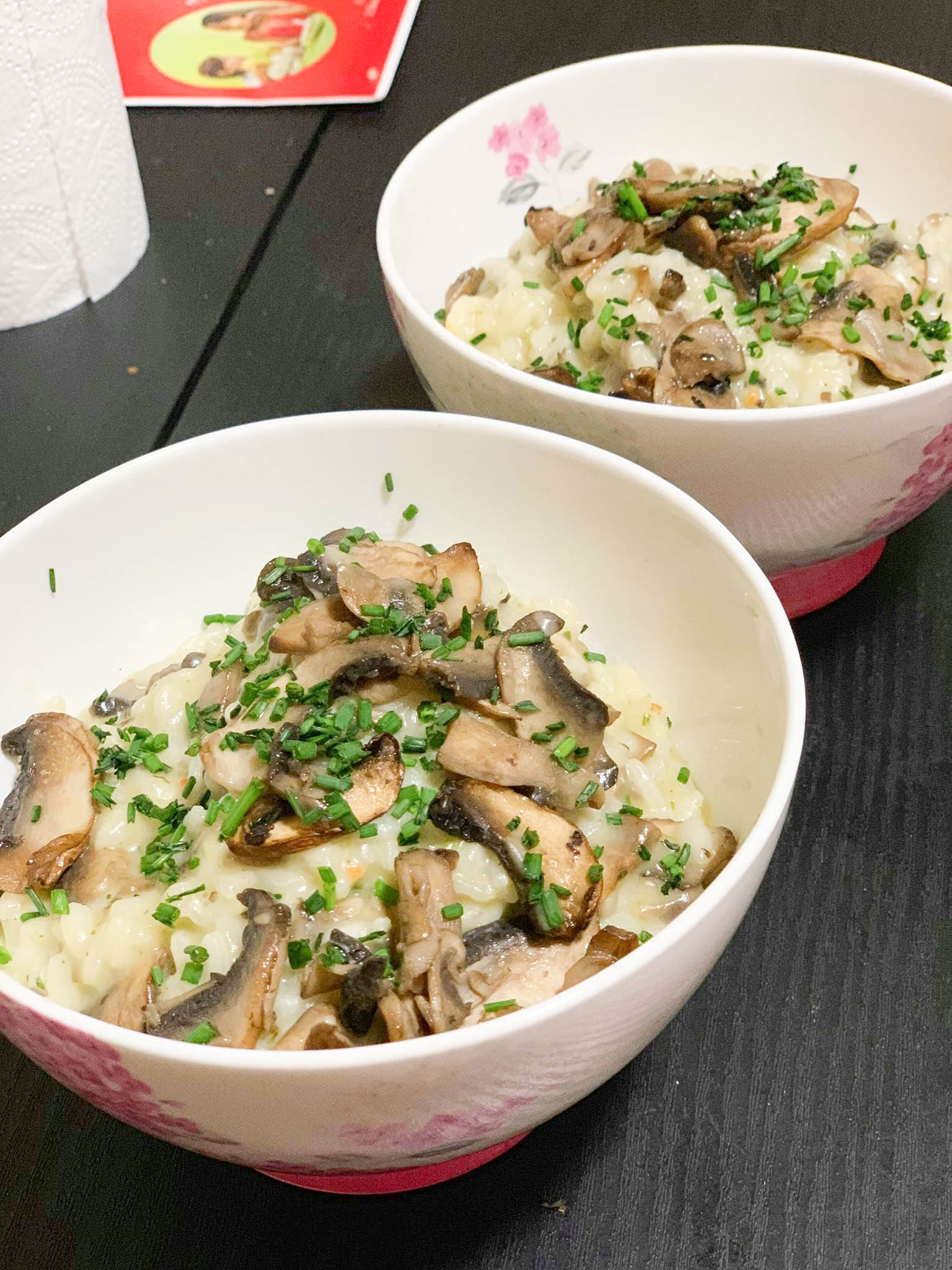 The Creamy Two Mushroom Risotto was out of this world and probably the best risotto I’ve ever tasted, again thanks to just clever flavour combinations – it was salty, creamy, earthy and just everything you would want from a risotto, although this one wasn’t plant-based too, but it was worth falling off the wagon for! It was incredibly indulgent and a real treat meal, but I would definitely jump head-first into that one again when it comes up as a recipe choice. 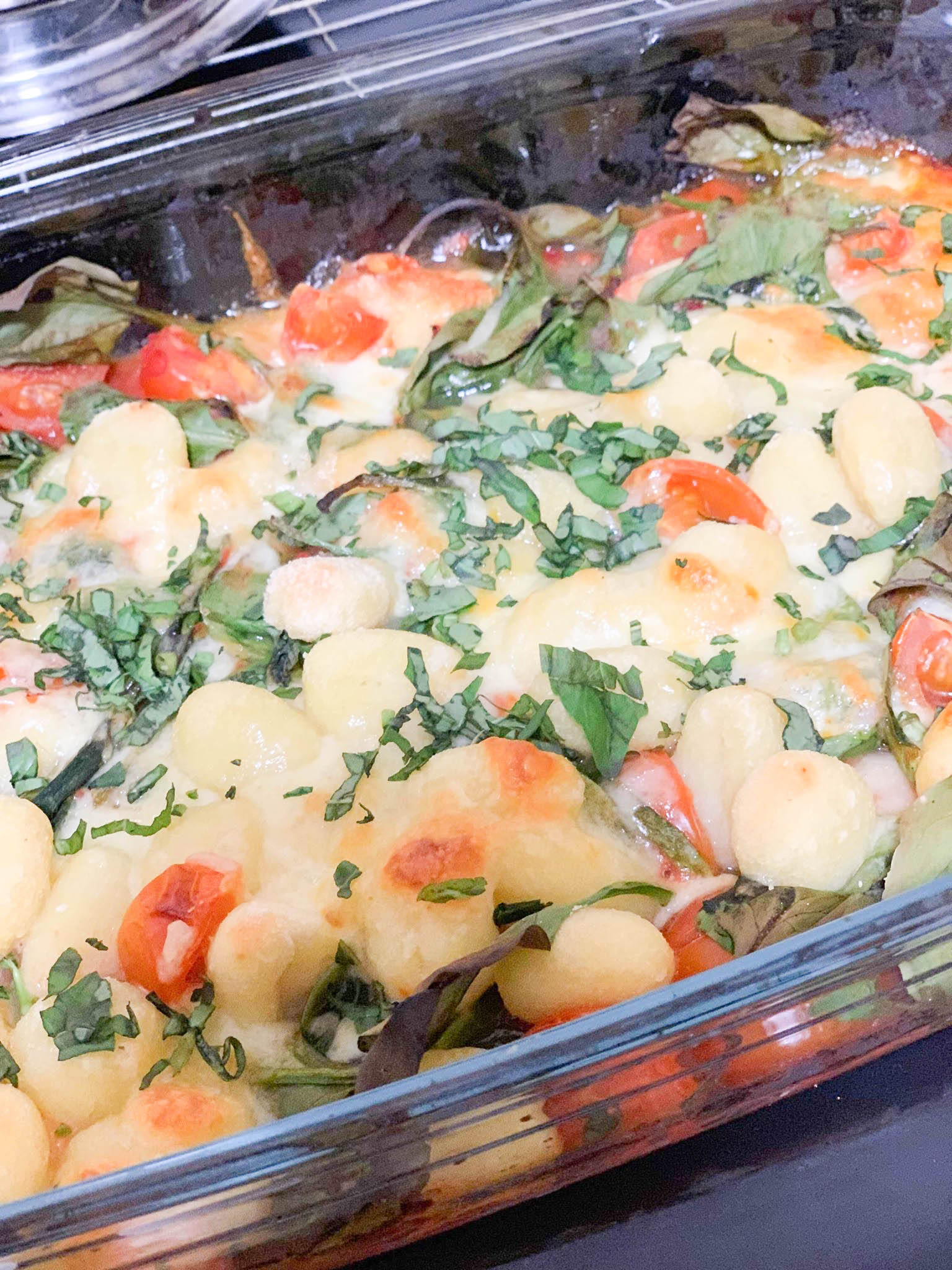 Of course the service isn’t perfect and the meals aren’t always as insanely tasty as the ones I’ve mentioned; the Cheesy Tomato Gnocchi Tray Bake wasn’t much to talk about, and the few attempts I’ve made at cooking Tofu haven’t turned out very well, but I will say that the idea of the recipes boxes is that it takes away all the complexities out of sourcing and measuring ingredients, but of course you still have to cook the actual meal, so it’s definitely a great way to learn more techniques and ideas, but if you’re someone who’s not very good at keeping an eye on cooking and who tends to burn everything, that probably isn’t going to change! That’s what I think I like most about the Gousto boxes is that you still have to do a lot of the hard work and still get to enjoy the whole process of preparing a meal, which I really do find a pleasure. 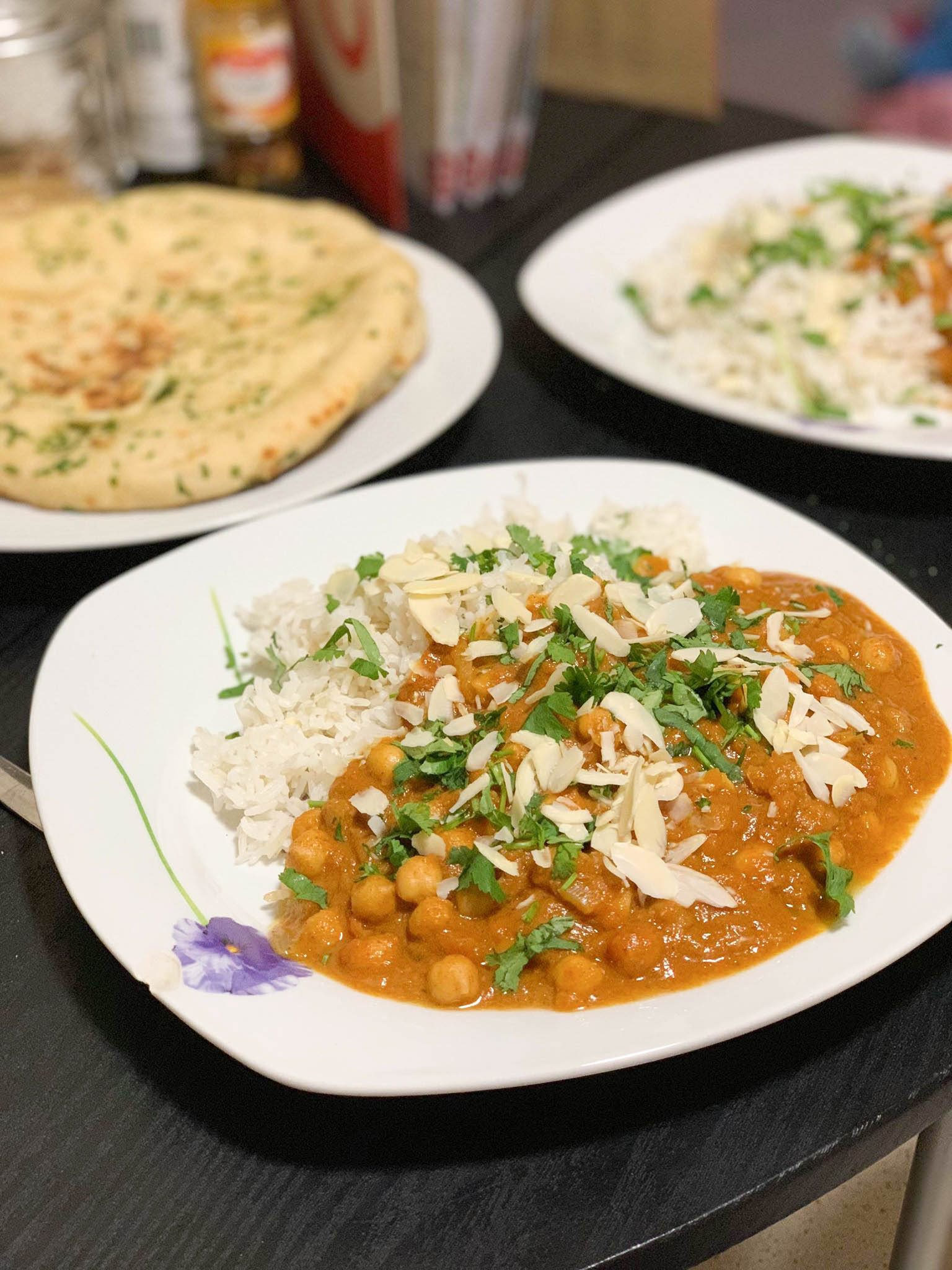 I can’t believe how long this post has become! I wanted to write a detailed explanation of what you get when you order a recipe box, so hopefully that’s been achieved.  The service isn’t the cheapest as it works out at around £10 a meal if you go for the 2 person/3 meal box, but I have cut right down on waste, so I don’t try and guess what we’ll be eating each week as from Monday to Wednesday I know exactly what’s going to happen (the others days are family stuff/takeaway etc) so I don’t end up adding lots of bits and bobs to my Ocado order, which is instead reserved for household stuff, so believe it or not, I’m actually spending less on a weekly basis and I’m wasting very little, which makes me very happy.  I genuinely thought I’d ride out the promotional month when I joined, then cancel, but I’m so impressed with the whole experience and it really has made a huge difference to my life – I’m not even being dramatic! I look forward to selecting the meals, receiving the order and making the meals, as the whole experience is worth every penny.

This is an affiliate link, so feel free to Google it if you don’t want to click through my link, but at the moment Gousto are offering 60% off the first box, then 30% off the following month (so the next three boxes if you order weekly) which gives you a great chance to try the service at a considerably reduced rate.